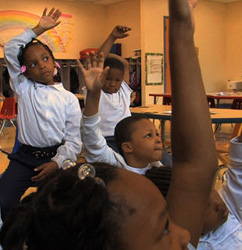 Few inner-city schools can boast the success of Providence-St. Mel, a parochial institution located on Chicago’s west side with a 100% graduation rate. An enormous brick structure with a perfectly manicured lawn, its halls cast a beacon of hope to the gang ruled “urban ghetto” that surrounds it. Providence-St. Mel is indeed one of the great success stories in American education, but the documentary does little to probe why the students are successful and more to trumpet its many accomplishments.

We’re never told how the student’s poverty stricken parents are able to afford a private education, or what the necessary procedures are for enrollment. It’s never mentioned how the teachers rank or if non-Catholic students are accepted. There’s probably a decent story buried in here somewhere. We just never have a chance to see it.

The story that matters most is also the one that’s absent. It’s that of Paul Adams III, the school’s founder and resident dignitary. An Alabama native, Adams had roots in the 1960’s civil rights movement, and moved to Chicago after he was blacklisted by the Alabama Board of Education for his participation in the movement. A year after his arrival at Providence-St. Mel, Adams became principal and saved the school from permanent closure by the archdiocese. Adams seems like an interesting figure, with enough intrigue in his story to carry an entire film on his own. Yet his personal struggles are largely glossed over and his role marginalized as mere happenstance.

The film does have a powerful message in that inner-city black and Latino children can compete with those brought up in wealth and privilege. But without reason as to how someone from the west side of Chicago defies the swallows of poverty to achieve greatness, there’s no reason for anyone to hope.