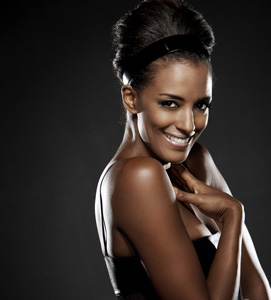 From biologist to model to actress, Ella Thomas is a woman who doesn’t let anything stand in her way. In just four short years, she’s gone from the pages of Marie Claire and Allure to sharing the silver screen with Bruce Willis in the action thriller Surrogates.

Growing up the daughter of an Air Force officer stationed in Germany, Thomas moved to the United States as a teenager, landing in Connecticut, where she went to college, majoring in biology at the University of Connecticut.

“I wanted to ensure that I got a degree that gave me the most options,” Thomas explains.

A family friend’s mother kick-started Thomas’ modeling career at the age of 17, encouraging her to travel the short distance to New York for auditions and gigs, even though acting was a forbidden fruit. Thomas says her mother, a woman who worked four jobs so she could send her two daughters to private school, wanted her to choose a career that was stable and secure.

“I had always loved the idea of acting but my mother really wanted me to continue my education and get a degree. She wanted me to have a fallback.”

Sadly, Thomas’ mother passed away a few years ago. While the loss was devastating, it forced Thomas to reexamine her life choices.

“I thought, ‘What would I try if I wasn’t worried about the outcome or whether the odds were against me?’”

The answer was acting.

“I had always taken classes and done commercials, but this was the first time I threw myself into it wholeheartedly,” she says. “If I wasn’t going to succeed, it wasn’t going to be because I didn’t put the work in.”

That dedication led to quick reward with roles on shows like “Entourage” and “How I Met Your Mother,” leading to her part in Surrogates.

“If I hadn’t lost my mother,” Thomas says, her voice quavering for a moment, “I wouldn’t have moved to Los Angeles. It’s bitter sweet.”