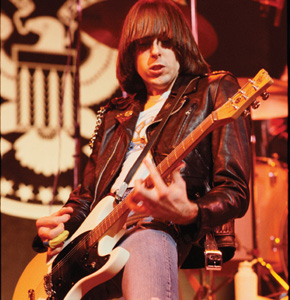 Celebrate the life of Johnny Ramone Oct. 3 at Hollywood Forever.

The fifth annual Johnny Ramone Tribute will take place Oct. 3 at the Hollywood Forever Cemetery. The celebration of the life of the late Ramones guitarist will include appearances by his former band mates Tommy Ramone and CJ Ramone, who will be available to meet with fans and sign autographs.

The 1977 Ramones concert film It’s Alive will be shown against the 24-foot mausoleum wall followed by a 3D showing of one of Johnny’s favorite movies, Night of the Living Dead. There’ll be an exhibit of rare Ramones memorabilia, an art gallery featuring paintings by (the also deceased) Dee Dee Ramone and special surprise guest appearances.

Tickets are $10, and proceeds will benefit the Johnny Ramone Research Fund at USC Westside Prostate Cancer Center. Prostate cancer killed Johnny Ramone at the age of 55 in 2004.

Is he jazz or is he hip-hop? Pianist Robert Glasper is both, thank you, and he takes the opportunity to present both sides of his musical persona on his latest release, the aptly titled Double-Booked. The first half of Double-Booked features the Robert Glasper Trio playing acoustic jazz, but Glasper has also worked with hip-hop artists like the Roots, Mos Def and Q-Tip, and his hip-hop fusion group the Robert Glasper Experiment takes over the album’s latter half.

Bilal and Mos Def guest on the effort, out now on Blue Note, and Glasper is currently the featured pianist on Maxwell’s BLACKsummer’snight Tour. If you’d like to hear the versatile Mr. Glasper in action catch him when Maxwell appears at the Hollywood Bowl Oct. 16.

L.A. rock band Something to Burn has signed with Scott Weiland’s (Stone Temple Pilots) Softdrive Records for the release of their debut album, Transitions. The title refers in part to the fact that the band is offering up music that they feel bridges the gap between the way music used to sound before the digital age and how it should sound in the future.

“Audiences today have been trained to bounce around and just listen to singles, but I don’t think that’s the way rock ’n’ roll ought to be – the whole ‘album’ experience is lost,” explains Something to Burn singer Greg Wayne. “This album is a journey, it’s dynamic; it swings from the super-heavy “’Start Again’ to the soft acoustic ‘Home’ and all areas in between.”

Transitions is out now, but the official release party will happen at the Roxy Oct. 2.

The new release from Finnish band the 69 Eyes features songs like “Lips of Blood,” “The Good, the Bad & the Undead” and “Dead Girls are Easy.” It’s no wonder that the band is nicknamed the Helsinki Vampires and that their album is called Back in Blood.

“Unsurprisingly, the main inspiration for the album came from the vampire realm,” says singer Jyrki 69. “We haven’t made a concept album, but nearly all the songs have something to do with the undead or at least horror as a genre.”

You may want to wear a string of garlic around your neck when you check out these bloodsuckers live at the KeyClub Oct. 6.

Tim Lambesis of As I Lay Dying has released another album as Austrian Death Machine, a two-CD set called Double Brutal. Half of the heavy metal package features songs that were inspired by Arnold Schwarzenegger movies (complete with appearances from Lambesis’ alter ego Ahhnold), while the other half is filled with Austrian Death Machine interpretations of songs made famous by the likes of Metallica, the Misfits, Agnostic Front and Motorhead.

Massive Attack is Back

Trip-hoppers Massive Attack will release their first new music in three years on Oct. 6. The as-yet untitled four-song EP will have to tide fans over until the duo finishes up their next album for a February release.

The 10th Annual Latin Grammy Awards will be held Nov. 5 at the Mandalay Bay Events Center in Las Vegas and will be broadcasted live on the Univision Network. Reggaeton sensation Calle 13 leads the nominations list with five. For a full list of nominees, visit latingrammy.com. —Marvin G. Vasquez