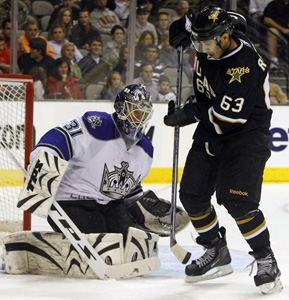 The puck drops on the ice Oct. 1, as NHL’s 2009-2010 campaign kicks into high gear when the Detroit Red Wings and St. Louis Blues take to their skates at Ericsson Globe in Stockholm, Sweden. With the Red Wings hoping to rebound from last spring’s stunning loss to the Pittsburgh Penguins, several teams have made moves to challenge for Lord Stanley’s Cup, while others have made moves to ensure their doom for years to come.

This year’s playoffs look promising, with the second round of the Western Conference providing the greatest potential for high drama and some very historic match-ups. If Chicago and Anaheim should meet in the playoffs, expect it to be one of the most epic playoff series of the decade.

If Boston, Pittsburgh, Detroit and Chicago can all meet in the conference finals, the NHL may have the greatest Final Four showdown in all sports in recent memory. Will Pittsburgh and Detroit find a way to meet in the Stanley Cup for the third straight year? Can Boston and Chicago have breakout seasons? Can Anaheim maintain itself as a Top 5 team? How will the league recover from the recent resignation of Wayne Gretzky? As each team embarks on its 82-game schedule, below is a quick breakdown of how each team will fare this season.

Pittsburgh Penguins: Sid the Kid out to prove Cup victory was no fluke.

Boston Bruins: Defense is much improved; should give Pens big challenge.

Chicago Blackhawks: Deepest and most talented team in NHL.

Washington Capitals: All is on Alexander Ovechkin to get this team over the top.

Carolina Hurricanes: Stéphane Yelle and Aaron Ward hope to bring back magic of 2004.

Columbus Blue Jackets: Made no off-season moves, but is this team good enough as is?

Buffalo Sabres: Several key off-season moves may give fans hope for this season.

Edmonton Oilers: Team is very young and talented; one or two seasons away from playoffs.

Ottawa Senators: No problem on offense. But shaky defense, goalkeeping are red flags.

Florida Panthers: Loss of Bouwmeester will be a huge blow to already weak team.