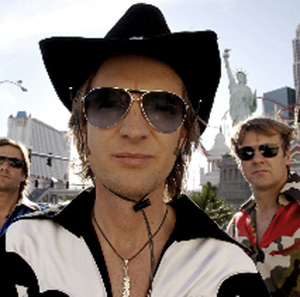 Much has changed since influential German Expressionist director F.W. Murnau created his masterful work Nosferatu. And though their presence is not as substantial as it once was, German filmmakers are still kicking ass and taking names, even over here in the good old U.S.A. In the last seven years two German films have won Oscars for Best Foreign Language Film and five have been nominated.

Now, German Currents, the 3rd Annual Festival of New German Films, is coming to Los Angeles featuring a lineup that pays special attention to films funded or shot in Northrhine-Westphalia, Germany’s most populated state and second largest hub for film and television productions.

In particular, Short Cut to Hollywood (Oct. 3, 7:30 p.m., Aero) is the breakout film of the bunch, depicting three 30-somethings who are sick of their average life in Germany and who try to get famous in traditional Hollywood fashion – scandal. The ringleader known to his fans as John D. Salinger is willing to lose limbs one at a time on national television, culminating in his broadcasted death.

Another noteworthy film to be screened at the festival is Nobody’s Perfect (Oct. 1, 9:45 p.m., Aero) about the faces of those disabled by the disastrous side effects of Thalidomide. Niko von Glasow is on the hunt for 11 people disabled by the chemical who will pose naked for a book of photos. The film is a touching look into the pressures to conform and the darkly humorous curiosity that resides in us all.