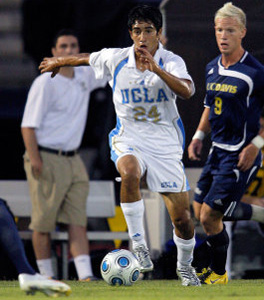 Men’s college soccer is well under way, and the No. 10-ranked UCLA Bruins look more than solid yet again early in the campaign. UCLA has compiled a 5-1 overall record thus far, and it includes a sounding 2-0 victory over No. 4-ranked Maryland (5-1-1) on the road. Their only loss came at Georgetown (6-2-1) by a score of 2-0.

The Bruins, led by head coach Jorge Salcedo for the sixth-consecutive season, are in for a tough battle in Pac-10 play, which begins this week with a trip to the Northwest. Salcedo’s squad pays a visit to Oregon State (4-2-2) Oct. 2 before traveling to Washington (3-4-1) two days after.

On Halloween, the Bruins will take a break from conference action, flying to the Midwest for a difficult match at No. 17-ranked Creighton in Nebraska. This game ought to display how the Bruin season might end, whether it is on a good note or not.

Thus far, senior forward David Estrada has made the biggest impact on the group. Estrada has registered six assists, and this statistic is currently one of the best in the nation. Senior midfielder Kyle Nakazawa has recorded two assists and four goals. Both players have been involved with the U.S. National Soccer Team in one way or another.

Furthermore, freshmen forwards Evan Raynr and Chandler Hoffman lead the Bruins in their offensive attack after netting a combined five goals. These two student-athletes seem like they will be integral for the rest of the season in determining how far the Bruins will reach.

Pac-10 play will feature eight affairs for the Westwood team. Two will be against Stanford (6-1) and two more versus fifth-ranked California (6-2). These four matches will be key, especially the ones on the road. UCLA should prevail because of their veteran leadership that includes eight seniors on the roster.