Back to the Biopic: Andy Garcia Brings Another Brilliant Artist to Life in Modigliani 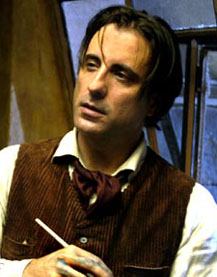 Andy Garcia is one of those few Hollywood actors who can play an important figure with enough intensity and exuberance to make his performance stay in your head long after the credits roll. He parlayed that vitality as the Spanish poet Federico Garcia-Lorca and most notably as the Cuban trumpeter Arturo Sandoval. So it was no big surprise when writer and director Mick Davis, who helmed romantic comedy The Match, wanted Garcia to play Jewish-Italian painter Amedeo Modigliani.

Garcia was familiar with Davis’ work and signed on the project without reading the script. He simply thought it would make a good movie.

“He was such an intriguing individual in the 20th century,” Garcia says of the painter. “It was like eye candy. It was too compelling.”

Modi, as Modigliani’s art friends dubbed him, was one of those geniuses on a quick spiral to self-destruction. The movie takes on the last few years of Modi’s life. Already suffering from tuberculosis as a child, he became a hard drinker and habitual drug user who broke many hearts along the way without a second thought.

“I was always enamored with the legend of Modigliani. It was clear to me before this movie existed,” Garcia says. “It had all the makings … the clichés of the tortured artist who lived fast and died young.”

It took five years to bring the legendary painter’s life to the screen. Davis gave Garcia all the room he needed to improvise and the actor ran with it.

Through his research, Garcia discovered that Modigliani didn’t lead a conventional life. Rather, he surmised that Modigliani had a massive appetite for life and a hunger for freedom, as well as a dark side and a fairly destructive lifestyle.

“I brought all my baggage [to the role]. Everything I am is in the movie,” says Garcia. “As a golfer, the terminology is, ‘I left nothing in the bag.’ I tried to live fully in the parameters of time to explore the material. I tried to live as fully, as freely and as deeply as possible.”

Garcia feels that his portrayal of the Italian painter is an accurate one. The actor took what he gathered from research about Modi and gave an excellent performance based on how he saw him. He didn’t romanticize Modi’s life because that would have been too easy. Garcia was able to show a balance of Modi’s happier times with the gloomy side of his life.

“My interest is not to make him flattering or pathetic. It’s not a popularity contest for me or for him,” Garcia says. “Someone else will play Modigliani and see him a little differently, and that’s what it is. I’m here to interpret the man and bring my idea of him.”

Garcia brought out Modi’s charm, his infectious wit and smile, and his biting remarks against adversary and sometimes-friend Picasso. He also brought out his passion and his apparent obsession with his work, as well as a dark side stemming from a painful childhood and his excessive lifestyle. His dangerous way of living not only affected him, but also his friends and his pregnant wife, Jeanne Hébuterne, who threw herself out of a window shortly after his death.

Garcia feels that because Modi choose to live so recklessly he denied the art world a lot of his true creative genius. “Because of the way he chose to live his life, he stopped growing. I think he had a very prolific life as an artist,” Garcia says. “He created a lot of paintings, but think about the paintings he did not create because he was busy recovering from the extraordinary hangover or the detoxification of the previous three nights. You think about the days he was unable to paint because of his condition; that’s the tragedy.”

Just like with Garcia-Lorca and Sandoval, Garcia took his every breath to bring the character of Modigliani to the film’s forefront. If anything, people who didn’t know the artist before can now mention him in conversation along with masters like Van Gogh and Monet. Knowing this makes Garcia’s hazel eyes light up brightly.

“What I like about it is that now the movie exists. That’s the most important thing for me, that we got the movie made,” he says. “It’s not about me or anything else. It’s about the work. It will have its journey and it will be around hopefully longer than I will.”

Modigliani is currently in theaters.