A Serious Man: Coen Brothers Get the Laughs 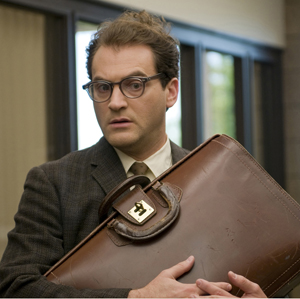 When the Coen brothers come knocking on an actor’s door, it’s time to get serious.

For their latest project, A Serious Man, they turned to Michael Stuhlbarg, a New York stage actor, to carry the story of Larry Gopnik, a physics professor whose life descends into chaos (not just the theory) when his wife announces she wants a divorce. While Stuhlbarg’s professional profile was raised significantly by his 2005 Tony nomination for “The Pillow Man,” he first came to the Coen’s attention through a small Off-Broadway theater company called the 52nd Street Project, a program for kids ages 8-17 where students are invited to write plays that professional actors and directors perform and direct.

Both Stuhlbarg and Frances McDormand, Joel Coen’s wife, were volunteers with the program and became friendly almost a decade ago, bringing him into the Coen fold.

“I got to know them socially, but always hoped I would have the chance to work with them,” Stuhlbarg says quietly.

A slight, gentile man, his well-trained and proper voice rarely raises above a low hum, descending a calm over the room when he speaks.

He says the chance to audition for A Serious Man came “out of the blue.” Initially he was asked to audition for a small part in the Yiddish folk tale that begins the film.

“I had to learn that whole scene in Yiddish,” the non-native Yiddish speaker smiles. “I went to a tutor, I learned the whole thing, I came in, and they laughed a lot. That made me really happy. But then they said they weren’t sure.”

Eventually the Coen brothers decided to cast someone who spoke Yiddish fluently, and four or five months went by without a word before they invited Stuhlbarg back to audition for the lead in the film.

“They laughed a lot, and I was very happy again,” he says.

Soon the part was his.

Even though it was his first time in a leading role, Stuhlbarg reveals the Coens were “very hands off, very respectful. Everyone is just a part of the team. As far as the actors are concerned, they are very discerning in terms of trying to find the right actor for a role, but once they do that, they love to get questions from the actor and they just let you do your thing. It was all very collaborative and easy.”

Playing the part of a man whose world has been ripped apart certainly wasn’t effortless, but the actor loved the universal nature of the character’s struggle.

“Larry’s resonant with everyone in that he’s going along in his life thinking it’s one thing and then he gets curve balls thrown at him. He has to make the best of them and do the best he can. We can all empathize with that.”

Larry’s plight was made even more complex thanks to the film’s setting in 1967 Minnesota.

“It’s a fascinating time to find yourself in terms of dreaming on what our country was like; the conformity and beginning of the lack of conformity and how a work-a-day professor’s life can veer off and change. What that means within the context of the time in our nation’s history. Larry’s journey kind of mirrors it, sort of a left turn and a new adventure.”

For all the nuances, unanswered questions and future job opportunities the role offers, Stuhlbarg’s love of A Serious Man comes from a very pure place.

“I just found it to be so funny,” he beams. “I kept laughing, and that’s a huge Geiger counter for me in terms of how I respond to stuff. If it makes me laugh, you’ve got me. That’s where I live. Humor saves me from everything.”

Interviews
Ai Weiwei on activism in the US, his art response to COVID-19 and a secret Wuhan film
447 views

Interviews
James Bond producer: 007 ‘can be of any color’ but never a woman
1,771 views

Interviews
For Martin Scorsese, making ‘The Irishman’ was about ‘learning to die’
1,408 views

Interviews
Maleficent doubts her fitness as a mother. So did Angelina Jolie
1,020 views
bid=||