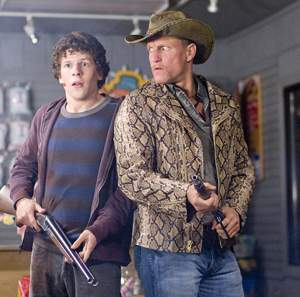 Zombieland is easily the funniest movie of 2009. Here’s why: They offer no real reason, but somehow, the world has fallen prey to some exotic brand of cooties that turns the majority of the human race into bat-shit crazy zombies. Hilarious.

Next, some genius – in this case, screenwriters Rhett Reese and Paul Wernick – drops some of the most unexpected and laugh-out-loud funny scenarios on a wild crew of characters. They’ve even included the year’s best cameo, performed by the incomparable Bill Murray. Add to this already brilliant formula, the most stylish and thrilling filmmaking to hit the big screen in a good while, and you’re just starting to break the surface of what Zombieland has to offer moviegoers.

Jesse Eisenberg (Adventureland, Rodger Dodger) stars as Columbus. He’s an antisocial nerd with a list of edicts for staying out of harm’s way in the face of the current zombie epidemic. As he escapes dangerous chase after dangerous chase, he winds up meeting a Southern badass called Tallahassee (Woody Harrelson).

The two form an unlikely partnership and head east; Columbus, to find his parents in Columbus, Ohio, and Tallahassee to Florida. While making a quick detour to stock up on junk food, the men run into sisters, Wichita (Emma Stone) and Little Rock (Abigail Breslin). Despite a rivalry in the beginning, they all team up and work together to stay alive – but not without kicking some major zombie butt.

In the end, the guys and the girls attempt to go their separate ways: Wichita and Little Rock take off to Pacific Playland, and the guys stick to their original travel plans. However, fate won’t keep them apart for long…

Eisenberg, who is no stranger to playing the nervous male lead, immediately took to his role.

“I loved the character when I read it,” says Eisenberg. “I could certainly relate to Columbus’ obsessive-compulsiveness; he’s the type of guy who can’t let himself enjoy anything. It was written very honestly, and I looked forward to being able to find the balance between that truth and the inherent humor in it.”

Harrelson had similar feelings about his character: “When I read the script, what I loved about Tallahassee was that he was a guy who essentially lost everything, so he has nothing left to lose, and as a result, he’s fearless when it comes to his approach to the zombies.”

Although running from flesh-eating freaks of nature is a common occurrence in Zombieland, it’s a constant tease as to how humans have become this way. That was a conscious decision on the part of the writers.

“This is a post-apocalyptic world,” explains director Ruben Fleischer. “It’s not people in the midst of a zombie scourge. Our story is about the people we’re following in this world, where there are way more zombies than people, and we wanted to tell the story of some of these few survivors struggling to make their way through.”

As for the portrayal of the zombies, the filmmakers were very adamant about doing something different with their version of the frightening characters. Instead of sticking with the traditional “dead people coming back to life” formula, it was decided to root the creatures in an existence that is similar to the current landscape.

“The classic and traditional zombies came from the undead,” says Fleischer. “I wanted to ground this story in reality as much as possible, so we determined this was a real disease that evolved and spread as a viral-based situation.”

As a result, special effects makeup designer Tony Gardner and his team researched an array of infectious diseases and their physical manifestations as each progressed.

“What we wanted to show was that these people were infected,” says SFX makeup artist Stephen Prouty. “They’re still alive, but they’re ravaged with fever so they’re always wet and dripping, they’re hemorrhaging from all their orifices and spewing up a black bile-like substance.”

Since production on Zombieland took place in Georgia, many of the extras in the film were cast locally. It took over 100 eager Southerners to create the terrifying monsters. The result is a comedy that combines the best of the horror genre with a humorous streak to rival that of films like Shaun of the Dead.