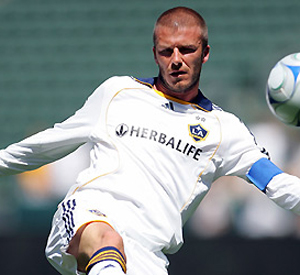 Galaxy midfielder David Beckham is out with an ankle injury.
(Credit: mlsnet.com)

Without midfielder David Beckham, the Los Angeles Galaxy suffered a 2-0 defeat against the Columbus Crew in Ohio.

The loss drops Los Angeles to 10-6-11 for the season. However, the club still remains in sole possession of second place in the Western Conference standings.

The Galaxy hold 41 points and are two points behind the Houston Dynamo (43 points). Columbus is currently in first place of the Eastern Conference with 46 points.

Beckham did not travel with the team for the match because of an ankle injury, which was suffered during practice last week. He was scratched from the roster two days before the contest.

Columbus, who played without two key players (Guillermo Barros Schelotto and Chad Marshall), saw Eddie Gaven and Steven Lenhart each score goals. Gaven netted a score during the first half in the 33rd minute, while Lenhart recorded his in the 59th minute. The Galaxy had scoring opportunities but could not convert on any of them.

Los Angeles returns to action Friday at the Home Depot Center, when the squad hosts the Chicago Fire at 8 p.m.