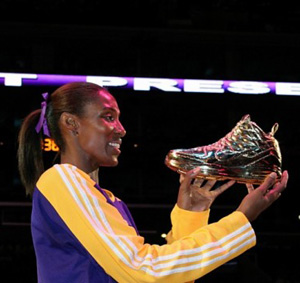 The Los Angeles Sparks fell one game short of the WNBA Finals for the second straight season after losing Saturday night to the Phoenix Mercury, 74-85. It was also the final game for Lisa Leslie, who was one of the league’s inaugural players in 1997 and spent her entire career with the Sparks.

After losing Game 1 of the Western Conference Finals at Pauley Pavilion, the Sparks forced a deciding third game by defeating the Mercury, 87-76, on Friday, behind 24 points and 18 rebounds by Candace Parker and 20 points by Leslie.

However, the Sparks could not carry that momentum into Saturday, as the Mercury held off Los Angeles despite a game-high 22 points from Leslie in her final game.

Diana Taurasi had 21 points, seven rebounds and three assists for the Mercury, who now face the Indiana Fever in the WNBA Finals.