Trojans Bounce Back Into Top 10 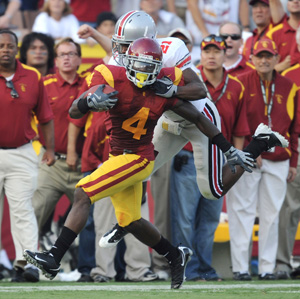 USC running back Joe McKnight rushed for 49 yards and one touchdown against the Cougars.
(Credit: Michael Goulding/Orange County Register/MCT)

They were 22 seconds shy of shutting out Washington State, but the Trojans will take a blowout victory over a Pac-10 rival just the same, as Southern Cal defeated the Cougars, 27-6, Saturday afternoon at the Coliseum. The victory moved them up to No. 7 in the AP Top 25 Poll, up from the 12th spot a week earlier; USC is also seventh in the Coaches Poll.

Not only did the Trojans handily defeat Washington State (1-3, 0-2), they also got a big boost from freshman quarterback Matt Barkley, who returned under center Sept. 26 after sitting out the previous week’s loss in Seattle. Barkley was hot early on, throwing his only two touchdown passes of the day within one minute of each other in the first quarter, finishing the game with 247 passing yards.

However, the win was not as dominating as the final score indicated. The Trojans (3-1, 1-1 in Pac-10) lost the battle of time of possession for the second week in a row, this time holding the ball on offense for just under 24 minutes. Southern Cal was also hit with 13 penalties for 115 yards, had two turnovers and earned fewer first downs (14) than the Cougars (18).

On the bright side, it was the Trojans’ seventh straight victory over Washington State and 11th straight home victory. Southern Cal travels to Berkeley to face off against No. 24 California Oct. 3.

Across town, UCLA (3-0) had the week off, but prepare for their first conference game against Stanford (3-1, 2-0) in Palo Alto this Saturday. Stanford’s potent offense (34.0 points favored per game) will be tested by UCLA’s stingy defense (12.7 points allowed per game). A Bruin win may push them into one of the Top 25 polls, while a Cardinal win will also do the same, pushing them to 3-0 in Pac-10 play.