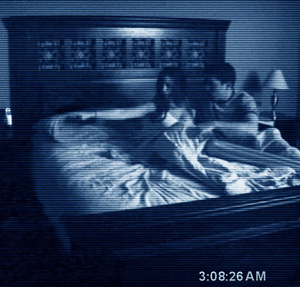 It must have been about halfway through the running time when I started to feel like I wanted to leave the theater, though not because the movie was bad … it scared the absolute hell out of me.

The story is simple. A young couple thinks their house is haunted, so they set up a camera while they sleep to see if they can make sense of the phenomena. They soon discover that the house is, indeed, haunted. Very haunted.

I finished Paranormal Activity with my hands covering my face. I had to will myself not to look away from the screen. This movie turned me into a cowering child.

It finally ended and the enthusiastic crowd began to mill their way out of the theater. I could hardly stand up. My legs were weak, I had a tension headache and I was physically exhausted from being scared. I had goose bumps on the way out of the theater and for most of my drive home. When I got to my apartment, I turned on my living room light and sat on the couch until the sun came up.

No movie has ever given me that much anxiety.

Paranormal Activity was apparently shot on a shoestring budget. The kind of horror on display is that which feeds on the power of suggestion, so don’t expect Poltergeist special effects.

In fact, the film’s best effect is its use of audio. If you’ve ever given yourself the shivers because you thought you heard a spooky sound in your house, then this movie will terrorize you.

Technically, and despite the budgetary restrictions, Paranormal Activity is firing on all cylinders. The cast performances are grounded in believability, and the camera work is what you would expect, given the cinéma vérité style of the narrative.

This movie is for anyone that’s ever been afraid of the dark in his or her own home. It’s for people that stay up too late telling scary stories, or surf YouTube for videos of ghosts.

Paranormal Activity is in limited release. If your area is not currently playing the film, you can insist to have it screened there by going to ParanormalMovie.com or eventful.com/paranormalactivity and demand it. If the demand is high enough, the film will come to your area.