Coming Attractions: Here are the Movies That Will Have Everyone Buzzing in ’05 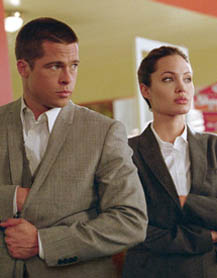 While sequels to Star Wars, Batman and Harry Potter figure to dominate the box office this year, there are at least 10 movies that will generate more discussion around the water cooler – and a couple may even make more money. Of course, last year at this time, Clint Eastwood hadn’t even started shooting Million Dollar Baby.

For now, at least, get ahead of the crowd with this first look at the 2005 movies that should have everyone talking:

KINGDOM OF HEAVEN, May 6

Story: Set near the end of the Crusades, a Christian Knight leads the defense of Jerusalem against a Muslim siege while dallying with the king’s daughter.

Buzz: Though it’s a conventional sword-and-sandal epic, the violence between Christians and Muslims will push some hot buttons – with images of Muslims attacking churches and tearing down the cross and mocking it.

Story: A happily married suburban couple is tested when each learns that the other is a professional assassin and that they have competing bosses.

Buzz: At what moment did Angelina come between Brad and Jennifer? Will closeups tell? Curious heads will be spinning.

Story: Adapted from H.G. Wells’ 1889 novella about the invasion of Earth by smart, well-equipped and very evil Martians.

Buzz: With life on Mars now more likely than ever, and the story updated to the present, it’s sure to cause a spike in the number of reported UFO abductions.

Story: With terrorism on the increase, a veteran CIA field agent finds that politics at home is draining his resources and serving the enemy in the Middle East.

Buzz: Besides its critical look at the beleaguered CIA, Clooney fans will be trying to guess how many dishes of pasta and Krispy Kreme doughnuts he ate while gaining 30 pounds for the part.

Story: Adapted from E. Annie Proulx’s short story about a ranch hand and a rodeo cowboy who fall in love while sheepherding in 1963 Wyoming (much to the relief of the sheep).

Buzz: Can Lee redeem himself for The Hulk, and will red-staters turn out for movie about gay cowboys on their own turf?

Story: Malick’s script is said to stick closely to the historical record in reenacting the tenuous relationship between British colonists and Native Americans in 1607 Jamestown.

Buzz: Lawyers fearing a run-in with child pornography laws compelled Malick to reshoot a love scene between Farrell’s John Smith and 14-year-old Q’Orianka Kilcher’s Pocahontas, who was, in fact, 12 at the time.

Story: Adapted from Anthony Swofford’s autobiographical novel about his experiences in a scout/sniper platoon during the Gulf War.

Buzz: Comparisons to the current predicament of soldiers in Iraq are inevitable.

Story: A filmmaker and two fellow adventurers follow a map to a South Pacific island whose natives and an assortment of dinosaurs are ruled by a 25-foot-tall gorilla with an eye for blonds.

Buzz: Watts’ Ann Darrow is said to be tougher ape-bait than Fay Wray or Jessica Lange, but with Jackson’s tech credits on The Lord of the Rings, the film special effects will be all the rage.

Story: A shady Broadway producer and a timid accountant conspire to raise money for a play they expect to close after opening night. Whoops.

Buzz: Creator Mel Brooks swears that Uma Thurman has a great singing voice and will give Ula, the boys’ Swedish secretary, extra sizzle. Plus, he’ll be filming all over New York this spring.

Story: Dramatizes the raid of the Israeli athletes’ quarters by PLO terrorists during the 1972 Olympics in Munich.

Buzz: The last time Spielberg followed a summer popcorn movie with a heartfelt drama about Jews in peril, he made his masterpiece, Schindler’s List.