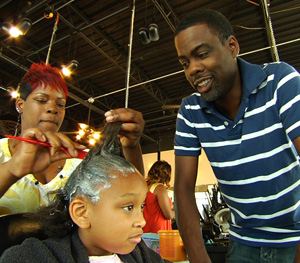 Chris Rock is one of the funniest people alive, there’s no question of that, and his new documentary, Good Hair, not only reaffirms his comic genius, it provides fascinating insight into the culture of African-American beauty ideals.

The film, which Rock co-wrote (with director Jeff Stilson, Lance Crouther and Chuck Sklar), produced and stars in, was sparked when his daughter Lola came to him in tears and said, “Daddy, how come I don’t have good hair?” He decided he needed to figure out how and why his daughter, who was only 5-years old at the time, had already developed a complex about a part of her body that she would be battling and obsessing over for the rest of her life, along with the majority of the rest of the black community.

Traveling from hair battles in Atlanta to weave shops in Los Angeles, temples in India (where the best weave hair comes from) to barbers shops in Harlem, Rock spoke to stylists, admitted “creamy crack” addicts (another term for relaxer), hair dealers, scientists and celebrities to explore all the ways hair factors into life as an African-American person.

Rock was first struck by the idea for a film on this subject 15 years ago when he stumbled across the Bronner Bros. hair show in Atlanta.

“I thought it would be a good movie,” he says, “but I was in no position to get a movie made at the time, at least not that kind of movie.”

But a decade and a half later, his daughter’s question jarred him back into thinking about the subject of African-American hair and the epic subculture and commerce that surrounds it.

“It started out to be a movie about the hair show,” Rock explains, “and we were going to do tentacles out from the hair show, but it turned into the exact opposite.”

The film evolved to include celebrities like Nia Long discussing the finer points of “weave sex,” the Reverend Al Sharpton talking about his first perm and Maya Angelou describing hair as “your glory.”

“For every person in the movie, there’s two who got cut,” Rock says.

He reveals the celebrities and national figures who made the final cut were “the ones who were open about it. [Those who] were out of the closet about their hair.”

Of course, it isn’t just the African-American community that has an obsessive relationship with something purely superficial about their appearance. When asked if he sees any parallels in the Caucasian, Hispanic or Asian communities, Rock immediately replies, “Of course. [Look at] the amount of white women who dye their hair blonde. They’re not blonde. Half this town’s blonde, and they’re not really blonde. Most of my friends’ wives have nose jobs. No one likes what they look like anymore. That’s the world we live in.”

To be fair, it isn’t just women who fixate on how they look. It took some pressing, but Rock finally admitted he’s splurged on his own beautification before.

“I don’t know,” he hems and haws before offering, “You get particular about getting your hair cut.”

So what’s the most he’s ever spent to ensure he looked good?

“$700 so my barber could come and cut me,” he says before insisting, “but not for the cut, for a plane ticket! [It was before] going on stage at Madison Square Garden in front of 20,000 people. In my normal life, I could care less, but when I’m going onstage, everything has to be right.”

As Good Hair’s producer, star, co-writer and shepherd, everything had to be right as well. Rock says his role in seeing the film through from concept to completion wasn’t wrapped up in a single title; it was all part of delivering a brilliant final product.

“[John] Singleton once said to me, ‘I’m not the director; I’m the protector.’ That stuck with me.”