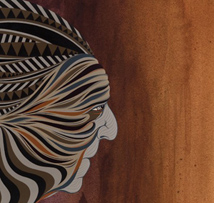 When Black Flag grew their hair long and started to play five and six minute-long songs complete with lengthy guitar solos, some in the crew-cutted macho punk scene were scandalized. Were these icons of hardcore letting the hippies win the culture war? Well, Greg Ginn made no secret that he was both a Deadhead and a Ramones fan all at once.

More than a generation later, Los Angeles’ Ancestors play rock in a similar vein of syncretism. The songs are generally long, as in 13-plus minutes long, and sewn together with synthesizer music that could have been taken from the soundtrack of a Nova special on the life of bacteria.

Each song is a genre-bending epic in which you can hear disparate echoes of Fugazi, Pink Floyd’s Dark Side of the Moon and Finland’s funeral-doom kings, Skepticism. Intense and at times lugubrious, the songs take their own sweet time, giving the finger to those behind them who would dare honk their horns.

Of Sound Mind is currently available.