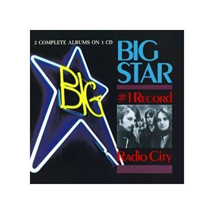 Children of Chuck Berry, the Beatles wrote with an eye on eternity, generalizing as they reached back for the blues. Children of the Beatles, Big Star reached back only for pop, with a boogie that came natural in Memphis, and wrote more specifically: “The Ballad of El Goodo” (about Vietnam), “Thirteen” (teenage self-romance), “In the Street” (broke young boredom –later covered by Cheap Trick as the theme to “That ’70s Show”) and “The India Song” (daydreaming) capture their ’70s moment as vividly as anything that people actually saw or heard that decade. Like the rest of Big Star’s first album, #1 Record, they evoke what people thought or felt while listening to ’60s rock and contemplating real life beyond.

Finding those songs in their original sequence – along with the spine-tingling “September Gurls” from Radio City, the follow-up recorded after co-leader Chris Bell left – is one of rock’s essential pleasures. But owners of both can skip the reissue-plus-bonuses on Concord and head straight for Keep an Eye on the Sky, Rhino’s lovingly annotated and packaged box set, chock full of previously unreleased (and un-bootlegged) rarities – including a live recording of the Alex Chilton-led lineup from January ’73.

Rhino Handmade’s deluxe issue of Bell’s posthumous mid-’70s solo album I Am the Cosmos emphasizes the same point: The loss of Big Star to commercial oblivion was a hole that indie rock has been filling ever since.

#1 Record/Radio City, Keep an Eye on the Sky and I Am the Cosmos Deluxe are currently available.