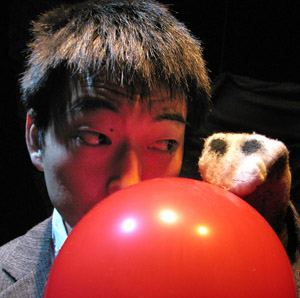 Though she’s praised for the bravery of her ideological rebellion, April Fitzsimmon’s one-woman show, “The Need to Know,” is everything a liberal theater-going Angeleno drowned in blue blood would be expected to congratulate as brave. It’s anti-Bush and anti-war and coming from an ex-Air Force intelligence analyst with Top Secret clearance, all its criticisms are enough to make the most nervous Democrat feel comfortable and superior in his assumptions. The communists infiltrating our society will love it, the real Americans will not.

Fitzsimmons should be applauded not for her politics (which are banal at the end) but for her performance ability, her eye for mannerism and her charisma, which fill out the autobiographical monologue into a show that feels acted by six people at least. She humanizes her ranking officers by capturing their scowls and humor. She’s compassionate depicting her hometown. She plays herself with a plucky humility that makes anyone into a hero who takes a chance on her. Is it new-century Americana? Not quite. It’s Times editorial.

The show is buckets of funny. But variations on the theme of existential anxiety encroach on the laughs: heartbreak, international secrets, powerlessness; and those are what make “The Need to Know” worth seeing.

It isn’t a double feature. “Sole Mate,” a micro-musical performed by Cristina Bercovitz’s sneaker, is a cleverly written ballad about the pun in the title. Set to a score more satisfying than you’d expect for a show of “found object puppetry,” it provides a kind of prologue to Bercovitz and Daisuke Tsuji’s clownscape “Death and Giggles.”

Tsuji is made up in faint whiteface, costumed for the streets not the circus, too troubled to be a happy fool, too playful with morbidity and too eccentric for normal adults with expectations of what a clown should be. Good, because he wants to push the envelope on what a clown can show you and how. He puts his memories inside of balloons, pops them, then throws imaginary food at you, as part of enacting a nonlinear story about his suicide and completing a mythic cycle. You can see the ambition but his execution hasn’t totally caught up.?Bercovitz and Shannon Kennedy (on puppet design), and Jonathan Snipes (sound design), help make “Death and Giggles” enchanting and eerie. The questionable benevolence of dreamlike puppets with nightmarish voices doesn’t come across as hackneyed. Faces in the set wall of abstract coral look like sea anemones chewing. It’s heady, tactile stuff. I’d watch a puppet show they did with lint.