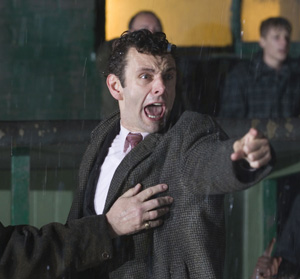 It’s the very expensive price of ambition, and you can’t just throw money at it and hope it goes away. Fame and glory and recognition, they are the product and the price of said aspiration, and they can really come back to bite you in the butt.

Brian Clough is the most successful manager you’ve never heard of. Known as football to the rest of the world and soccer to only us ingenious Americans, the sport was revolutionized by the young manager who refused to accept his place as he shattered the etiquette once so integral to an establishment run by British high society.

Fluctuating between the late 1960s and early 1970s, The Damned United is based on a true story about the career of Clough played by masterful Michael Sheen. Despite very different career paths, the actor, whom you may know from Frost/Nixon and the highly anticipated Twilight sequel, New Moon, found a point of reference between him and his eccentric character counterpart.

“If, just as everything was ahead of me, if at that point something had happened to stop me from ever acting again, if I had become a director instead of an actor – that was my point of connection with him. If I was not able to do what I believe was my vocation, and then did something that meant I watched other people doing it – what does that do to you? There’s a terrible sadness about it, which he completely covered up,” he says.

The film is set when Leeds United is the best soccer team Britain has to offer, and manager Don Revie is the most popular man in the country. Derby County is the worst team in the nation, and no one even knows who Brian Clough is. That is, until Derby County takes just a few years to work its way up to the No. 1 spot.

With the help of his right hand man Peter Taylor (played by the ever-talented Timothy Spall), Clough manages to score the job of his life – manager of Leeds United. Clough naively approaches the position under the assumption that he can bring change to a team that, in the past, relied on underhanded tactics to win.

Still faithful to former manager Revie’s ways of playing the game, the team takes Clough begrudgingly. And like most eager visionaries wanting to succeed the honest way, Clough spends a brilliant 44 days as manager before the team does so poorly it is forced to fire him.

Clough goes on to win back-to-back European Cups with Nottingham Forest, considered one of the greatest achievements in football history. But it’s his reputation as a controversial figure that precedes him. And it’s those damn 44 days, those damned United that will remain as his legacy.

Though Clough passed away in 2004, his spirit is adroitly carried through Sheen, who is charisma personified. However, the accomplished thespian did an abundant amount of research and developed a theory about the outrageous public figure.

“For a man who was famous in Britain for being the epitome of arrogance and self-confidence,” says Sheen, “the thing that surprised me was how little self-confidence he really had, how much he had to achieve things in order to boost up his self-belief. Anyone who’s that driven to achieve, to be the best, I think feels that they have to make up for something. There’s a never-ending hunger for something that has to be fulfilled.”

Director Tom Hooper moves the story effortlessly, and Sheen’s portrayal of the misunderstood football manager allows the viewer to become fully invested in rooting for the underdog.

And I’ll be damned, you will be rooting for him.