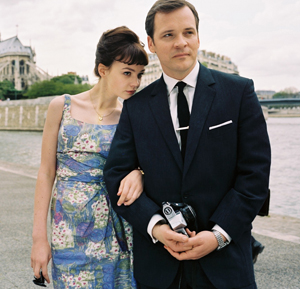 With the economy the way it is, it’s a lucky person who isn’t worrying about money and their own economic circumstances. In 1961 England, 16-year-old Jenny (Carey Mulligan) is the star pupil at the expensive school her parents have sent her to in the hopes that she’ll get into Oxford. She lives in sleepy, suburban Twickenham with her conservative parents and plays cello in the youth orchestra because that’s what the family can afford. But Jenny dreams of a star-studded life in Paris, full of glamour and sophistication.

And then suddenly, there’s David (Peter Sarsgaard), driving onto the scene and into Jenny’s life. David is everything Jenny wishes she could be, and he’s willing to take her along for the ride. With his money, he introduces her to a world full of nights out at the opera, classy jazz clubs and art auctions.

He’s even agreed to whisk her off to Paris for her 17th birthday and managed to convince her parents to let him do so. The catch? He’s in his 30s.

But even so, David is kind and caring, not at all your typical sugar daddy trying to turn Jenny into a glorified whore. So just when her goals are all within reach, Jenny must choose between educating herself on the easy route to life she’s wanted for so long or taking the traditional role towards the self-sustaining lifestyle her parents always wanted for her.

An Education, a memoir by Lynn Barber that was adapted by Nick Hornby (High Fidelity, About a Boy), is a masterfully told coming-of-age story. It’s got everything a good drama should have and the emotions that get bandied about feel so real, it’s heartwrenching.

The film benefits from a star-studded cast that includes Alfred Molina, Rosamund Pike and Emma Thompson, but it is Mulligan who really shines in the film. This young actress captures the feelings of the film perfectly without overdoing it and you can feel yourself itching for the sparkle of city lights along with her.

Even though the story is set in the 1960s, it doesn’t feel dated. Sure, the costumes are a little hokey, but they’re true to the era (which, in all reality, was also a little hokey) and the themes (which is what really matters anyway) are timeless.