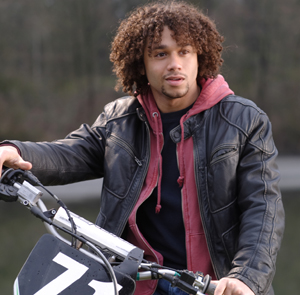 One thing that happens when you ask motocross riders about their sport, you see their faces light up. This sport is about passion and the determination to improve. It’s a sport you have to go out of your way to advance and to become a part of. It’s a culture in itself that only a few are ever exposed to.

But unlike baseball, basketball or hockey, motocross focuses on a team of one. You will never hear a motocross rider give you any batting averages or lineups, but you will hear how motivated they are and how many times they are willing to grab their bikes and try to make something of themselves.

In the movie, Free Style, starring High School Musical’s Corbin Bleu, you see how hard his character, Cale Bryant, works to help support his family and his passion. He works two jobs selling electronics and pizza, but no matter how hard it gets, the more Cale struggles to get the one thing he has worked for.

Cale’s ultimate life goal is to become a professional motocross rider, which might sound like a one in a million opportunity, but in this case, Cale believes he could be that one. He knew from a young age it would never be easy for him to go to college or live up to the goals he had made for himself, but that was not going to stop him.

Through every task and job he undertook, he has seen his mom (Penelope Ann Miller) end up in the hospital, he lost his girlfriend to a competitor motocross rider, grew up with no father and lost his sponsorship, all which can really bring a person down. But he was not ready to give up.

He kept pushing his bike up the hill no matter how many times he was pushed back down and because of that, he grew. He found an old, beat up bike and worked three times as hard to make it into a masterpiece.

He became one with that bike – knowing how it moved and how much he needed it to bring him above everyone else. With the support of his sister (Madison Pettis), his mom and new girlfriend (Sandra Echeverría), Cale knew he could do anything he set his mind and heart on.