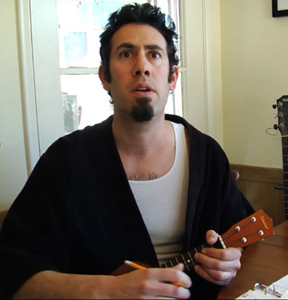 Once upon a time – back in 2002 to be exact – a quirky comedic actress named Nia Vardalos released her film, My Big Fat Greek Wedding. That project blew the door off a world that was only known by kids with eccentric and ethnic parents. It went on to become one of the top-grossing independent films of all time.

Did it do so with flashy special effects? Nope. Did it have a high caliber cast? Well, save for John Corbett and a few character actors from back in the day, uh-uh. It succeeded based on a funny point of few, a bunch of sweet-natured jokes and good old fashioned word of mouth.

Well, Vardalos may need to don some comfortable shoes so she can very carefully step aside and pass the torch to a new group of filmmakers with a dream. Robyn Rosenkrantz (producer) and Michael Glover (writer-director) bring their fun and snappy sensibility to the comedy Karate Film Café.

This duo is also behind Bright Blue Gorilla, a musical project that has afforded the two to travel throughout Europe, singing and making money to turn out fun films. They have lent their names and ambition to bringing back TRUE independent filmmaking (with previous releases such as The Mind of Henry Lime and Sister Sarah’s Sky), as opposed to moviemaking, which has been partially funded by and/or co-opted by the big studios – KUDOS!

Karate Film Café is an amusing look at a Hollywood Karate school that teaches a ... special brand of martial arts. It houses a DVD store with busted and lame movies (uh, can you say Be Kind Rewind?) and to add insult to injury, it’s also got a cafe that employs a cook who just isn’t worth a damn.

What’s more, there are a slew of funny characters particularly my favorite, Stew (played by Brian Joseph), a singer allergic to everything. He’s written a song about it. Want to hear it? Here it goes...

I’m not going to tell you that Karate Film Café will change anybody’s life. I’m also not going to lie and say that it’s a flawless piece of movie magic. But to anyone who loves a good laugh and a little bit of campiness, it’s right on time. I think of it as a cross between Monty Python and the work of Joel Hershman. Trust me, they don’t call it “90 minutes of Love, Death, Bad Food and Good Music” for nothing.