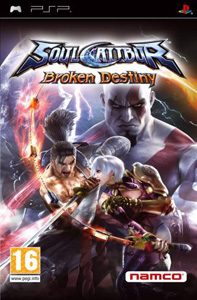 Whether your preferred combat is in the past, present or future, any time is a great time to hook up with a digital buddy and kill your way through a landscape of baddies. Of course, it helps when the games have that extra level of polish to really endear you to the world you are slashing or shooting your way through. Here are some new titles that bring us back to some of our favorite death dealers.

While the graphics may not have improved, the classic design from the originals still deliver the same dark thrill as they did on the GameCube. The story has definitely remained fresh and engrossing, offering an exciting ride for newcomers and a nostalgic romp for old fans of the series.

For a beautiful new chapter in a classic fighting franchise, “SoulCalibur: Broken Destiny” offers intense action that betrays its PSP-only release. Fans of the franchise will not be disappointed by the graphics or gameplay – both of which are faithful to the bigger screen titles. Best of all, the controls are simple and intuitive, allowing quick combat without fighting with the notoriously questionable PSP control scheme.

The roster of playable combatants is also gloriously overwhelming. In addition to the pantheon of fighters, the game has introduced the stylish, dirty fighting of Dampierre and this title’s overpowered cameo – “God of War”’s immoral immortal Kratos. As always, you can also design your own fighter in the surprisingly robust character creator and put them to the test in a variety of fighting challenges.