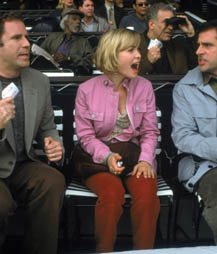 The signature of Woody Allen’s films is his ability to successfully blend elements of raucously funny comedy and heart-wrenching drama into one cohesive two-hour piece. His latest effort, Melinda and Melinda, takes this recipe and formalizes it into a bifurcated story of love and loss, movies and music, horse racing and drug overdoses.

The conceit of the film is a disagreement between two playwrights on how the story of Melinda, played by Radha Mitchell, should be told. One version, which features Will Ferrell, focuses on a hilariously mistimed love affair she undertakes and its repercussions. This side of the story is a classic Allen comedy, with Ferrell taking the place that Allen would usually occupy – the neurotic yet loveable leading man. Inter-cut with this story is a darker version of what is essentially the same tale – which features Chloe Sevigny and Johnny Lee Miller – but retains Mitchell as Melinda. In fact, she is the only actor who plays in both versions, showing her range as both happy-go-lucky and world-weary all in the same film.

The way that Allen chooses to use music to signal the switch from one world to another is inspired, using boppy jazz in the comedy and dark Italian opera in the drama. The film segues smoothly between the two storylines, cutting back and forth on linking plot points. Though this has the potential to become stilted and predictable, Allen uses this device to illuminate moments in both stories from different angles, giving every event, and often times specific lines, dual meanings.

There is of course no shortage of witty dialogue. Allen’s rapier wit is as sharp here as ever, with commentary on life that rings more true than anything he has penned in years.

The real standout of the film is Chiwetel Ejiofor, who plays an urbane and gifted pianist who wins every female character’s heart, coming across as the most genuine and real of any of the characters. If the lesson of the film is that every story has at least two sides, the audience is left waiting for the bad side to this film.

Melinda and Melinda is currently in theaters.