Batman: A Death in the Family 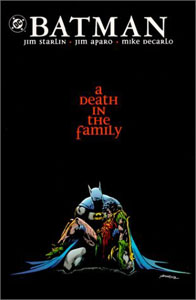 As part of its Classic Library, DC is reissuing Jim Starlin’s iconographic tale in a deluxe hardcover edition. The six-part arc tells the story of the death of Jason Todd, Dick Grayson’s successor as Robin.

Batman’s headstrong and emotional ward travels the globe in search of his biological mother, against Batman’s orders. Along the way he runs afoul of the Joker.

DC left Robin’s life in the hands of readers, who could vote via telephone on whether he should survive or not. Both endings are included here.

Also included is Marv Wolfman’s follow-up story, A Lonely Place of Dying, which introduces the character of Tim Drake, the third Robin, and examines the meaning of a young sidekick in Batman’s dark life.

Batman: A Death in the Family is currently available.