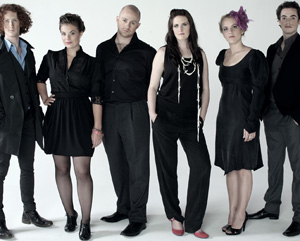 Stumbling upon a big, bright orange book in the UCLA library with a gold ‘Sonos’ inscription on it provided the a cappella sextet with inspiration to name their group after the French word for sound system.

“We already had four songs in. But we lost our momentum, and now we’re starting out again,” the singers assure.

For three years, the group has been gaining experience performing and continuously evolving their sound. They’ve even become somewhat of a critics’ darling. Ready to take the next step, the group recently released their debut album, SonoSings.

“We want to make music our friends can listen to, but also for people as old as grandfathers and high school kids,” the group says.

The album marks the beginning of the road for Sonos, and they now have to take on the challenge of changing people’s preconceptions of a cappella as gospel music. But the members are optimistic that their music will find mainstream success.

“There’s a weird shift in a capella making a comeback,” they explain.

Citing Fox’s hit series “Glee” as an example, the band believes they have entered the market at the right time. Moreover, their collaborations with a heterogeneous group of musicians like, Kanye West and Sara Bareilles, help to secure the support of listeners with different musical sensibilities.

“After shows, people come up to us and say they didn’t expect this to be cool,” relays the group