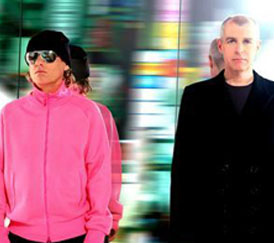 Has it really been two decades since the Pet Shop Boys first kicked out the club favorite “West End Girls?” Yes, it’s been that long, but from PSB’s show you would have thought you stepped into an ’80s time machine, modernized with digital video backdrops and dancers dressed as box people and buildings.

They put on a production of a show, to say the least, which played more like an edgy musical, mixed with colorful lights, choreographed dancers, synchronized beats, wrapped in the atmosphere of a UK club. Neil Tennant, donned his signature bowler hat and beautifully belted favorites like “Suburbia” and “It’s A Sin,” while Chris Lowe on his laptop provided the electro-digital music to accompany him.

New tunes from their latest album, Yes, included the single “Love, Etc.” and the upbeat “Did You See Me Coming?” A highlight was their rendition of “Jealousy,” where ballet and modern dance meshed to tell the story of a volatile, explosive relationship.