A Change of Pace: Makes An Offer You Can’t Refuse 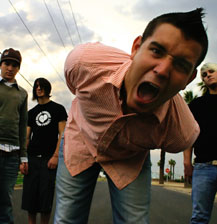 There’s an old show business question that asks, “Will it play in Peoria?” The young rockers who comprise A Change of Pace know that they’ll play in Peoria, at least in the Peoria that is a suburb of sprawling Phoenix, Ariz. That’s where Torry Jasper, Jon Kelly, Johnny Abdullah and Adam Rodgers hang their hoodies when they’re not on the road. Other cities, however, might not care to be so kind to the foursome.

The boys met with some misfortune while touring Texas, as singer/guitarist Jasper explains from a tour stop in Austin. “We’re on our way to Guitar Center right now because I got something stolen in McAllen. I’m going to hopefully figure this thing out and find what I need. I had a foot switch stolen. We played this VFW hall and there was no stage, so anybody could have gotten to it.”

The world is spinning pretty fast right now for A Change of Pace with the release of their debut album, An Offer You Can’t Refuse, for Immortal Records. After finishing up with high school last year (ACOP’s oldest member is 18) the lads jumped straight into their careers as professional musicians and mischief-makers.

“We took Mourning September’s room key before they got to the hotel and went inside their room,” Jasper giggles. “We took all their light bulbs, used their bathroom and turned all their furniture upside down. We tore up magazines and threw them all over their porch and stole all their bed sheets. They were just stunned when they walked in.”

Jasper’s not laughing, though, when he recites his No. 1 rule of the road.

“We’re just dirty all the time. You’ve got to take a shower whenever you get a chance!”

Not only is their name a common phrase, so is their album’s title. The disc’s cover artwork shows a man wearing a dunce cap and holding a wad of cash, apparently depicting the adage “A fool and his money …,” while songs have clichéd titles like “Home is Where the Heart Is,” “Death Do Us Part” and “Loose Lips Sink Ships.” Some of the song titles actually tie in with the respective song’s direction but most are inspired by another one of the band’s hobbies.

“We really like going on Google and searching for phrases and stuff,” Jasper says. “Some of the quotes are just so cool that we just had to put them on some of our song titles.”

“Loose Lips Sink Ships” is the first video offering from ACOP, and Jasper says, “It’s about ‘big brother’ always watching you. It starts off with a bunch of televisions, all blurred out, and one guy standing there with a television for a head. Then they all pop on and it’s going to be us playing in a big room with a bunch of surveillance cameras watching us. It was just a one-day shoot, but we had to do the song like 50 times. It was awesome.”

Simultaneously with shooting the video, ACOP went back into the studio to cut some new songs to use as B-sides for singles to be released in Europe and Japan. According to Jasper, the band had to flex its talent and cut those tracks on extremely short notice.

“We just got thrown into the studio. We only had three days’ warning and I was writing on the way to the studio in L.A. But they all came out really good; I’m really proud of them.”

Next up for ACOP is a tour with Senses Fail, and Jasper has a little advice for his fellow minstrels.

“Don’t let anybody near your van or leave your hotel key at the front desk!” Because that, indeed, will make for a change of pace.

An Offer You Can’t Refuse is currently available. For more information, visit www.achangeofpacemusic.com.