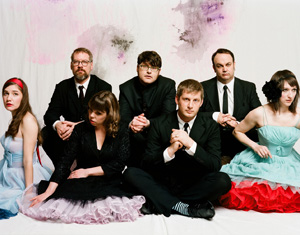 The Decemberists: Here Come the Waves

The Decemberists released The Hazards of Love earlier this year and have been playing the album in its entirety during their A Short Fazed Hovel Tour. The band will be giving their last American performance of the album at UCLA’s Royce Hall Oct. 19 with the music augmented by animation.

Here Come the Waves: The Hazards of Love Visualized will find the band performing The Hazards of Love synchronized to new animation created by celebrated filmmakers Julia Pott, Peter Sluszka, Santa Maria and Guilherme Marcondes. The Decemberists will also play a second set of older and newer material. The show is a benefit for the Grammy Foundation’s “Grammy in The Schools” music education program.

In anticipation of the release of Six Pounds of Sound, their debut album for Suburban Noize, L.A.-based heavy metal band Taintstick has issued a challenge to Sting. The band released the following tongue-in-cheek statement declaring war on Sting’s upcoming Christmas album, If On a Winter’s Night, while also calling for the star’s retirement:

“Sting, we’re sure you understand the feeling. You were there once, and now Taintstick are coming in hot, and we’re ready to go big. We therefore challenge you to a duel; winner take all. Six Pounds of Sound vs. If On a Winter’s Night. If you sell more, we bow to the tantric master, but if we sell more… you start spending more quality time hanging out in some of those well-earned castles of yours.”

Italian post-punk/prog-rock band Afterhours will headline the first installment of (H)ITWEEK L.A., a week-long celebration of Italian music, cinema, fashion, art and design, travel and, of course, food. Parties, exhibitions, film screenings and various other events will take place throughout Los Angeles from Oct. 13 through 18, but the big musical showcase will take place Oct. 16 and 17 at the Henry Fonda Theater as Afterhours is joined by some of the most vibrant bands on the Italian scene, including Negrita, Piero Pelu, Linea 77, Le Vibrazioni, the Niro and Calibro 35.

This is the first event ever held in the States that is dedicated to exclusively promoting the substantial Italian modern music scene. The new Afterhours album I Milanesi Ammazzano il Sabato (“The Milanese Kill Saturdays”) is already a hit in Italy.

Astralwerks has just released a mammoth box set from electro pioneers Kraftwerk entitled 12345678 The Catalogue. The eight-CD box features all of the German band’s albums beginning with 1974’s Autobahn through to the only Kraftwerk album of the 21st century, 2003’s Tour de France.

The collection can also be purchased as a download and as individual CDs, but due to licensing agreements the CDs Computer World, Techno Pop and The Mix are only available in the box set. The whole project celebrates the 35th anniversary of Kraftwerk’s breakthrough hit single, “Autobahn.”

Thao with The Get Down Stay Down

The upcoming album from Thao with The Get Down Stay Down is called Know Better Learn Faster because the band’s frontwoman Thao Nguyen thinks the title is funny. Sort of.

“The album is named Know Better Learn Faster because you can’t,” Nguyen explains. “By the time you realize you should, it’s too late. And I enjoy the predicament and the totally devastating unfunny humor of that.”

Know Better Learn Faster drops through Kill Rock Stars Oct. 13, and Thao with The Get Down Stay Down play the Echoplex Oct. 16.

The long-awaited documentary from Jack’s Mannequin frontman Andrew McMahon will be released on DVD Nov. 3. Dear Jack chronicles the recording of the Everything in Transit album as well as McMahon’s battle with leukemia. The film will screen in Los Angeles at an as-yet unnamed theater on Oct. 28, and McMahon will play a solo show at the Troubadour Oct. 29.