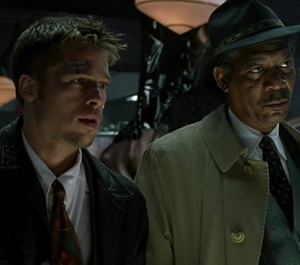 Se7en is a film that didn’t overuse horror conventions.

This week, there’s a question I want to mull over. When most of the new films that come out in a certain genre become slaves to convention, the films tend to become less original in their design.

But most new horror films rely heavily on the conventions that built them, and a lot of them may not hold up without those conventions. What I’m wondering is if people care or not. Do people want more or are they satisfied seeing the same conventions used over and over again?

For instance, every horror film must have orchestra hits. An orchestra hit is when you get a loud blast of sound when something or someone jumps out at the characters on screen. Just in case whatever jumps out doesn’t freak you out, the unexpected burst of sound will.

Even I jump in films when that happens, even when the movie isn’t scaring me at all. Technically you’re not really being scared, you’re being startled.

The orchestra hits are used over some of the biggest conventions of the genre. Examples are: a character opening a mirrored surface then closing it to reveal somebody behind them; opening a door then closing it to reveal someone behind them; suspense builds up, a cat or something small jumps out as a fake out and then the real killer jumps out; the killer pops back to life one more time after he’s supposedly been killed. Stuff like that. Nine out of 10 horror films have at least one of those examples in them.

Some examples of films that didn’t overuse these conventions are Alien, Jaws, Se7en and the first Saw. My question is: “Do people care?” Do people want more scares based on the material, or are they content to be startled by orchestra hits over the same conventions? Either way, one convention that will always be scary and never get old is dead silence.

I have to break away from film here for a minute and address something completely unrelated to movies. For some time now I’ve been noticing a troubling grammatical trend that has begun to worry me. I’ve noticed that a lot of people are using the word “loose” when they mean to use the word “lose.”

You may be thinking that it’s a simple mistake and probably nothing, which is what I thought at first, but then I started seeing people do this in lots of talkbacks, forums and blogs on the Internet way too often to be coincidence. If you don’t believe me, just keep your eye out for it.

I have a theory as to why this is, but I really hope I’m wrong about this. My theory is that it’s possible that people are becoming dumber. Americans are not as bright as we used to be.

Now that we have celebrities who are dumb as nails that are practically celebrated for their dumbness, being intelligent and well-rounded is no longer something to be admired. You can be dumb as nails and be just as influential, if not more, than people who are renowned for being smart.

Are things like this making people feel that they don’t need to be smart? I’m concerned that people letting the word “loose” slip past them is maybe one of the first small symptoms of the mental deterioration of America.

However, I really hope I’m wrong about this because there’s nothing more I’d love than for Americans to be super smart and super articulate. You know, like Glenn Beck.