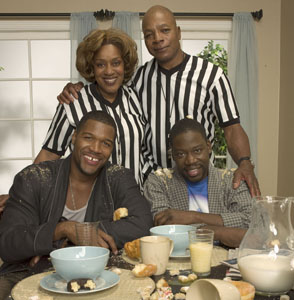 Combine two movie veterans, throw in a former NFL player and sprinkle in a little chemistry and the result is a hilariously funny sitcom.

“Brothers” focuses on a former NFL hot shot (Michael Strahan) who moves back to his parent’s house in Houston and finds that his sibling rivalry with his wheelchair-bound brother (Daryl Chill Mitchell) has not lessened with age.

Wedged between the brothers are their strict-but-loving parents, played by veteran actors CCH Pounder (“The Shield”) and football pro-turned-actor Carl Weathers, who gained fame as Apollo Creed in the Rocky movies.

With elements of “Family Matters” and “The Cosby Show,” it’s a heartwarming and comical sitcom, which centers on the relationship between the brothers and features guest appearances by Kim Kardashian, Tichina Arnold, Lenny Clarke, Mike Tyson and Snoop Dogg, who plays a lawyer.

“It’s a show about family and the adversity that we all encounter in our lives, and the thing about this family is that they really epitomize family, love and support and throughout or in spite of their bickering, they have a bond that supersedes anything else,” says Weathers.

A show with a predominantly African-American cast in an era when black-themed series seem to be dwindling, many are hoping it will revive the demise of the black sitcom, but Strahan, who helped create the half-hour comedy, isn’t feeling the pressure to deliver.

“Black sitcoms have been dead. There hasn’t been one in a while. But we don’t look at it as a burden or a challenge or anything like that. We look at it as just a good show. We want to put on a show that is funny and is something that anybody can enjoy, and it just happens to be that we are an African-American cast.”