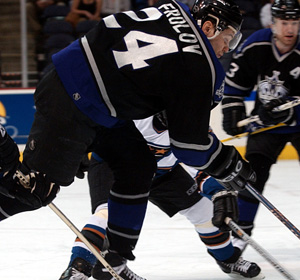 No amount of controversy off the ice was enough to stop the Phoenix Coyotes from spoiling the Kings’ home opener on Saturday, as the embattled NHL franchise in the Valley of the Sun defeated Los Angeles, 6-3. Ilya Bryzgalov made 30 saves in net, and Radim Vrbata scored two goals for Phoenix, while the Kings received goals from Drew Doughty, Anze Kopitar and Alexander Frolov.

“That’s probably the worst scenario that you have on opening night,” Kings head coach Terry Murray told the Associated Press after the game. “We looked very out of sync, we were not passing the puck well, we were overhandling the puck and it was just sloppy play.”

Los Angeles (0-1-0) was without top defenseman Sean O’Donnell due to a two-game suspension earned in a preseason game against the New York Islanders. The Coyotes (1-0-0) played their first game under new head coach Dave Tippett, who replaced Wayne Gretzky after his Sept. 24 resignation.

Meanwhile, a few miles south in Anaheim, the arena formerly known as the Pond was invaded by the Sharks, as 1-1-0 San Jose defeated the 0-1-0 Ducks, 4-1, on Saturday. Newly acquired Shark Dany Heatley had two assists, while Patrick Marleau and Joe Thornton both scored a goal apiece in the first period; San Jose goalie Evgeni Nabokov made 24 saves in between the pipes. The lone Ducks goal came about halfway through the third period, when Ryan Whitney found the back of the net to end Nabakov’s bid for his 47th career shutout.

“They played the game at a higher pace than we were playing it at,” Ducks head coach Randy Carlyle told the Associated Press.