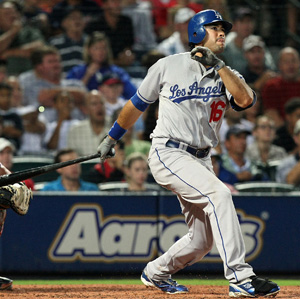 All eyes are on Dodger Andre Ethier in the playoffs.
(Credit: Curtis Compton/Atlanta Journal-Constitution/MCT)

Dodger catcher Russell Martin made his way to the clubhouse iPod before last Friday’s opener against the Colorado Rockies and carefully dialed in his selection. A soulful rock ballad, “Carry On My Wayward Son” by Kansas, came over the sound system in the locker room sung at climactic pitch: “Carry on my wayward son, there’ll be peace when you are done, lay your weary head to rest, don’t you cry no more.”

It seemed an apt choice for a team struggling to win just one more game to clinch the Western Division title while fighting off their longest losing streak of the season. Of all times to hit the skids!

Since squandering a four-run lead against the last place Pittsburgh Pirates with just two outs to go on Sept. 27, the Dodgers could not catch a break. The starting pitching, the bullpen and the hitting had all floundered, and anxiety was beginning to mount.

Some jokes were made among players and the press that the losing streak was some kind of secret ploy to bring home the Division-clinching win to Los Angeles, but following Friday night’s defeat against the second-place Colorado Rockies, the suggestion didn’t sound so cute. The anxiety lingered until well into the night on Saturday, Oct. 3.

Despite stellar pitching by Clayton Kershaw, the game was scoreless until the bottom of the seventh when, at last, the offense burst into life. Casey Blake, James Loney, Ronnie Belliard, Mark Loretta, Juan Pierre and Manny Ramirez, in succession, tag-teamed to bang out five runs before a jubilant crowd of 54,000.

It was as though a curse had suddenly been lifted, and the crowd sobbed with ecstasy. The Dodgers sealed the deal with Jonathan Broxton on the mound in the ninth and a lazy fly ball to right fielder Andre Ethier for the third out. It seemed a fitting touch that all eyes should be on Ethier after a season in which the right fielder has been responsible for half of the team’s 12 walk-off hits.

“It tastes so good once it finally touches your lips,” said Casey Blake wearing a ski mask in the clubhouse amidst gales of champagne and beer exploding in every direction.

While the party carried on there was already talk of the future.

The postseason begins Wednesday, Oct. 7, when the Dodgers host the St. Louis Cardinals for a best-of-five series. There are legitimate reasons for the Dodgers to be intimidated.

Of the seven games the teams played this season, the Cards won five. Furthermore, in a short series the importance of a couple of dominant pitchers is amplified. It is not a good sign when the opposing team’s one and two pitchers are competing with one another for the league’s Cy Young Award.

The Cardinals will start Chris Carpenter (17-4) and Adam Wainwright (19-8) for games one and two. At Dodger stadium this season they have combined for an ERA of 1.50.

Randy Wolf (11-7) will start game one for the Dodgers, a pitcher with as much heart as anyone in baseball and a fastball frequently below 90 mph. In his last start, Wolf lasted only five innings, giving up five hits and four walks while allowing two runs in the first inning. Wolf is known for starting off shaky but getting his bearings straight in later innings. In the postseason, that kind of performance doesn’t fly.

Clayton Kershaw (8-8) will start game two for the Dodgers. The 21-year-old old pitcher who injured his non-throwing shoulder last month earned the spot after throwing a fantastic five innings on the day the Dodgers clinched. The solid performance was an encouraging sign, but many wonder if the youngster has the necessary experience to pitch well in the postseason.

Regardless of who pitches, the Dodgers will have to face the likes of Albert Pujols and Matt Holliday, arguably the best hitters in the National League, in the middle of the Cardinal lineup.

With Sunday’s victory over the Rockies, the Dodgers ended their season with a record of 95-67, equaling their best record since 1985. In that year the Blue Crew advanced to playoffs and faced, of all teams, the Cardinals. Dodgers lost in six games, but hey, like the regular season itself, that’s history!