The Ballad of Jack and Rose: Daniel Day-Lewis and Rebecca Miller Team for Complex Indie Film 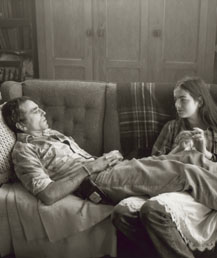 Although he is the star of The Ballad of Jack and Rose, opening March 25, this is not the typical Day-Lewis film. The story is about Jack (Day-Lewis) and his 16-year-old daughter Rose (Camilla Belle). The duo live on the site of Jack’s abandoned island commune. Jack has sheltered Rose from the influences of the outside world, but now Rose’s emerging womanhood poses troubling questions about the days ahead. A man who has lived a life motivated by environmentalism and other altruistic causes, Jack now rages at those who do not share his concerns, like developer Marty Rance (Beau Bridges), who is building a housing tract on the edge of his property. When Jack invites his girlfriend Kathleen (Catherine Keener) and her sons Rodney (Ryan McDonald) and Thaddius (Paul Dano) to live with them, Rose feels betrayed and the situation quickly becomes precarious. Rose acts out wildly, creating chaos. As everything flies out of control, Jack finds himself trapped in an impossible place and is forced to take action.

Yes, the film is quirky and Day-Lewis’ character is multifaceted just like many of his former characters. Ballad, however, is a small, independent movie without the likes of directors Martin Scorsese or Jim Sheridan behind it. Nonetheless, the film does have a backer in the up-and-coming, arguably established writer/director Rebecca Miller.

Not only is Miller coming off Personal Velocity, winner of the 2002 Sundance Film Festival Grand Jury prize, she is also the daughter of one of the greatest playwrights to ever live, Arthur Miller. Despite her background, casting Daniel Day-Lewis as the star of one’s film is a major coup for any director, let alone one who – prior to Ballad – had only helmed two films.

Some might assume that since Day-Lewis and Miller are married, she might have persuaded Day-Lewis to play Jack. However, the couple quickly denies any such accusation. Miller explains that she did not write the film with Day-Lewis in mind and began writing the story in 1993, before meeting her future husband. Ten years later, Miller, who by that point had married Day-Lewis, not only completed the script but also had the funds to make the film.

Despite her romantic relationship with Day-Lewis, Miller had no expectations when it came to him being involved in Ballad. She had shown a version of the script to Day-Lewis while he was making the film version of her father’s play The Crucible in 1996, but he passed on the project. Therefore, Miller assumed that he would again reject the role.

“I never thought he would do it,” Miller says. “After I got the money to make the film with no cast, I’d said to him, ‘You’re my first choice’ and expected him not to do it. I started making a list of other actors. It took months of him reading the script and thinking about it but, after awhile, he could see himself as this character. He heard the writing in his head.”

Day-Lewis explains what drew him to the project after passing on it years earlier.

“You can never fully put your finger on why you are suddenly compelled to explore one story as opposed to another, but it happens,” he says. “In all the occasions [when] I have gone back to work – and this might sound a bit grandiose – it is inevitable. That may be a complete delusion, but nonetheless, it is the one I needed to get out of bed and go about my business. That sense of, ‘I can’t avoid this thing, I better get on with it.’

“I can’t say in this case why it changed [my mind]. But I do know that when I first read [the script] and before I met Rebecca, that I was intrigued by it, but I also knew – beyond any doubt – that it was a moment when I wasn’t able to do it and make the contribution that she needed from me. I just knew it.”