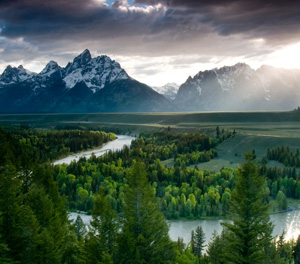 We’ve all seen conservation photography. You know, the images of dolphins dying in nets or a sea turtle slowly starving because there’s a plastic ring stuck around its neck. The kind of image where you can get a glimpse of what nature was before humans decided to use it carelessly.

Sure, some of these images might spur people to get up off their couches and donate some money to an environmental cause. But these are not the images Ian Shive shows to the world in his new book, The National Parks: Our American Landscape.

“90 percent of [conservation photography] falls under what I call ‘the fear mode’ – the wilderness is threatened, you know, save this and that,” says Shive. “But my whole goal is to find a way to inspire people to do things. And I think by showing what’s out there, what’s worth saving, what’s so beautiful, what’s so inspiring and sometimes just so interesting about being outside, that’s what I’m trying to convey in the images.”

And Shive’s photographs are nothing if not inspiring. He is the kind of photographer that captures landscapes untouched under fantastical sunsets or animals frolicking in their natural habitats. These are not your LOL Catz photos or that squirrel lounging in your backyard.

So how did this former marketing suit in Sony’s major motion picture division become the award-winning photographer that he is today?

“It’s been kind of something that I’ve enjoyed for a long time. Like a lot of people, I started in college,” he says.

But while he was at Sony, he led a double life. He would go to studio events during the week, but the weekends would often find Shive moonlighting in an exotic (to us city dwellers, at least) landscape. And then it would be back to the daily grind on Monday.

“That kind of went on for a couple of years, and it was kind of like a secret dual life, because one thing in your professional career is that you don’t want people to think that there’s something bigger, better, more important to you. I really did enjoy my job, but sometimes, people just don’t quite understand that you can have two things that you really enjoy doing. So I tried to keep them as separate as possible.”

About two and a half years ago, though, this double life caught up with him. With a portfolio full of images from weekly excursions, Shive packed up his life at Sony for good. He took his archives to an agent who managed to sell Shive’s images to the likes of National Geographic and Outside Magazine, and not only covered (first class!) travel expenses, but also started to ask specifically for his talent.

“It got to this point where I really enjoy being outdoors,” says Shive, “and I have this great job and I’m getting offers to travel around the world and around the country shooting these jobs, making, you know, almost – well, not as much money. It’s definitely a risk and at times, it’s a good living, but it’s certainly a much better lifestyle.”

And when you look at his photographs, sometimes it’s hard to imagine that those photos are anything but Photoshopped. The colors are sharp and vivid – certainly the sky could never turn that shade of purple! But Shive insists that the beauty in his photography comes only from nature. This is more of an issue of principle than of pride.

Because as Shive says, “It’s not just taking pretty pictures. People can affect change through photography.”