You're Smoking?: You Gotta Be Joking! 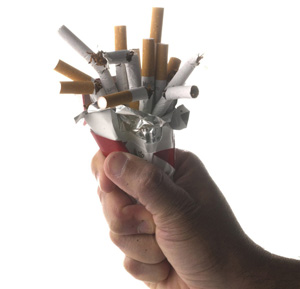 More lethal than car accidents, suicide, alcohol, AIDS, homicide and illegal drug-related deaths combined, smoking poses a very serious and deadly threat, yet approximately 4.5 million children and adolescents, in the United States alone, choose to smoke cigarettes. When you light up you are ingesting and emitting more than 4,000 chemicals, 40 of which are carcinogens like tar, carbon monoxide, nicotine and hydrogen cyanide, a chemical used as a genocidal agent in World War II and to kill rats.

Your sense of taste and smell decreases, your teeth rot, you become weaker, it’s an incredibly expensive habit, it costs $1,500 to smoke a pack a day for a year and you are more likely to use and abuse alcohol and other drugs. When you smoke you are not only polluting your health and the environment, you are also destroying the health of others; secondhand smoke kills around 50,000 non-smokers each year. Kind of selfish, isn’t it?

“Why would I pay four dollars a day to kill myself?” asks Stephanie Chassman.

“I want to be able to breathe when I am 40,” claims Kelcie Meyer.

Liberty Tilman plainly states, “I’m too good for them.”

Cigarette companies try to make smoking seem elegant and sexy, but the majority of young people aren’t buying it.

“I want to be seen as classy and not die a painful death,” states Kamer Erken. In addition to being unappealing and aimless, teens’ most serious concern: potential and probable fatalities.

One-third of all new smokers will die from smoking related diseases like cancer, heart disease, lung disease and strokes. Many teens have seen these effects firsthand; they have lost their relatives or friends to these diseases.

Jasmine Delgado dislikes the side effects smoking has had on her father: “I hate when he smokes them. I hide his cigarettes sometimes.”

Jonathan Benbeniste says he won’t smoke because “my grandpa died of lung cancer,” but “I probably would have if he hadn’t.”

Is that what it takes? Do people need to have a firsthand experience with death to prevent them from making poor health decisions?

Every teen who was asked about smoking knew a smoker and was aware of the health risks.

“How can you not be?” asks Jesse Pilchen.

And if they didn’t know all the specifics, then they had a very good general idea. So why is it exactly that teens continue with this horrible habit if they know that their lives are at stake?

“I really have no idea why. I started because I was really young and stupid and I was told it would relieve stress, now it’s become a habit,” states Hillary Kolber.

“I like the taste, and it’s a five-minute escape from everything when you can just concentrate on your thoughts,” declares Chloe Dahl.

Mekenna Ball smokes “partially for the oral fixation of smoking and it’s a great stress reliever.”

These smokers are the minority, and if they do smoke it’s normally just as a social activity, but there’s a good amount of these smokers who constantly crave this poison. Dahl says, “I need cigarettes to function, or it’s all I can think about and I’m in a horrible mood.”

Most realize the risks and have tried to quit multiple times, but ultimately they were unsuccessful since smoking is a habit that grows; the younger you start, the more likely you’ll be hooked for life. If they’re starting now, then they’ll have a serious addiction as well as many expenses and health problems to deal with in the future.

There is hope though. If a teen smoker were to quit now, in 10 years their lung cancer and heart disease risk would be back to that of a non-smoker. It may seem like a long time, but if you think about the large amount of deadly toxins that have permeated your body, this is a pretty quick fix.

And for those of you who aren’t smokers, don’t start now. It’s more likely you’ll never become a smoker if you don’t smoke in your teens.

So do yourself and others a favor: Don’t light up.