Los Angeles' Water Main Breaks: Should We Be Concerned? 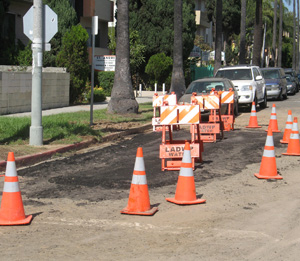 The corner of St. Andrews Place and 4th Street in Hancock Park
(Credit: Jessica Koslow)
Three new water main breaks on Sunday, Oct. 4, have just been added to the already long list of citywide ruptures. The first was reported at 12:45 a.m. on 5th Avenue just south of Martin Luther King Jr. Boulevard in Leimert Park. A second minor break was attended to on Menlo Avenue and 133rd Street in the Gardena corridor around 1:30 a.m. The third occurred on St. Andrews Place at the corner of 4th Street in Hancock Park shortly before 4:30 a.m.

Water main breaks in Los Angeles this past September were double what they were in September of last year, but the breaks are not indicative of an extremely unusual problem, according to Department of Water and Power officials.

In the month of September, the DWP has recorded 43 breaks that have required “significant repairs” as opposed to the 21 breaks that required those same repairs last year. The number has doubled, but it is within the normal range that the DWP experiences in the aging Los Angeles pipeline system.

The Department wants the problem of the recent breaks to be put into “proper perspective.” The number is actually lower than the number of ruptures that occur nationally.

“[Los Angeles is] averaging four leaks per day,” says DWP spokeswoman Maychelle Yee, “which is actually low when you look at the national average.”

However, the issue has garnered higher attention recently because of the persistence and grandeur of the incidents, forcing people to believe that the problem is more dire than usual.

The first blowout to attract attention occurred on Sept. 5 in Studio City. A water blowout occurred on Coldwater Canyon, engulfing the street in extreme water and mud. The street was closed for an entire week in order for the rupture to be fully repaired. Then, just two days after the blowout in Studio City, a water pipeline broke in Valley Village. The breakage created a six-inch sinkhole that a fire engine fell into.

Both incidents created dramatic images that attracted high attention, and the numerous incidents that occurred after – in Encino, Sylmar and the Hollywood Hills – have only contributed to peoples’ growing concern.

The Department recognizes that there has been an increase in larger breaks this year. These breaks are characterized as those that force shut downs of streets and cut off service to DWP customers. There have been 30 of these ruptures since September. Other recent breaks occurred on Saturday, Oct. 3, in Glassell Park, which flooded and damaged three homes, and then Monday, Sept. 28, on San Vicente Boulevard and Fairfax Avenue, which caused street closures and cut off service to a dozen customers.

An investigation is currently underway to determine what has been causing the breaks in the water system. However, the department won’t begin to speculate on any causes until the investigation has been completed.

“We are investigating and don’t want to be rushed into a wrong answer,” says Yee. “We are looking into every single possibility.”

The department is consulting with outside experts from the University of Southern California, NASA’s Jet Propulsion Laboratory, Cornell University and others to help them with their investigation. Some of these experts are speculating that the mayor’s recent push to conserve water caused the ruptures. They believe that cutting sprinkler use to two or three times a week caused strain on the water main system, forcing the pipes to rupture.

The Department is also actively trying to repair the pipeline system in general. According to the DWP Web site, “LADWP has replaced 160,000 feet of mainline and has set a goal of replacing 110,00 feet in the coming year.”

In the midst of these recent activities, Department of Water and Power Chief H. David Nahai, who has held this position since December of 2007, announced his resignation Oct. 2, adding that he plans to be an advisor to former president Bill Clinton’s climate initiative to fight global warming.

Deputy Mayor S. David Freeman, who was the head of the DWP from 1997 until 2001, will temporarily run the department until a replacement is found.