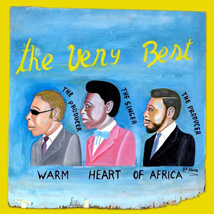 Could this album have been more aptly named? Its sound is warm. Really warm. And the Very Best features singer Esau Mwamwaya, who hails from Malawi but now lives in London, where he teamed up with the production duo Radioclit to form the band.

Mwamwaya sings in his native Chichewa language, but the CD booklet gives English translations for the lyrics, many of which are about the people of his homeland and his loves there. On the title song he is joined by Ezra Koenig, whose band Vampire Weekend has subtly introduced indie fans to juju and afrobeat. Later, on the dance hit of the record (auspiciously titled “Rain Dance”), Mwamwaya is joined by M.I.A.

The album’s overall afrobeat sound is also flavored with hip-hop and techno. But rather than thinking of this album as a kind of showcase for the “cross-cultural potential” of world music or a didactic lesson in Malawian culture for the more developed countries of the world, Warm Heart of Africa stands on its own as an eminently danceable and joyful set of songs.