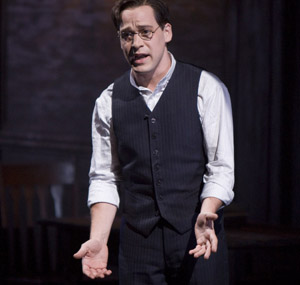 Perhaps the biggest hype surrounding “Parade” is T.R. Knight’s performance as plant superintendent Leo Frank. Most know Knight from his five-year run on “Grey’s Anatomy.” Yet, it is the true story of this sad historical drama that truly captures the audience’s imagination.

Knight does an excellent job portraying Frank, a Brooklyn Jew, who moves to Atlanta to work for his wife’s family. Though the play starts off with unexpected humor, the show quickly plunges into the sensational, tragic, trial of Frank for the rape and murder of 13-year-old female worker who was found overnight in his factory.

Pressured to solve the case, the media, community, politicians and judges pin the crime on Frank, a quiet, hardworking man. His case stirred anti-Semitism in Georgia and over the years, attracted much attention from Northern Jews and eventually, led in part to the formation of the Anti-Defamation League.