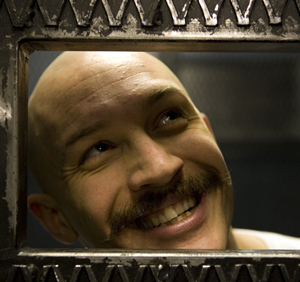 Director Nicolas Winding Refn made waves at the start of his career with his Pusher Trilogy, but it is his newest film, Bronson, that threatens to make him a household name. Since the film screened at Sundance Film Festival, Bronson has been earning accolades from critics all around the world.

Many of those critics are quick to compare Refn and Bronson to the late Stanley Kubrick and his A Clockwork Orange, though Refn acknowledges a much more avant-garde influence.

“I always wanted to make a Kenneth Anger movie,” he says. “Bronson is a combination of Inauguration of the Pleasure Dome and Scorpio Rising.”

So, how do you make an experimental film about Britain’s most notorious prisoner?

“You’re making a film about a guy in solitary confinement, which can be very tricky,” Refn says, and adds, “Because you can take a route which is all in a cell, but that wasn’t the wise thing. I wanted to make it almost like it was a stage performance. A guy would come on stage and talk about his life, and you’d visualize that. That’s kind of the structure of the film.”

When addressing what sets Michael Peterson, a.k.a. Charlie Bronson, apart from any other violent prisoner, Refn reasons, “He’s quite a clever man. If he had not gone into prison, he’d probably be one of the biggest ad executives out of England, because he’s very clever. Basically, the guy was able to create his own mythology. I wasn’t making a biopic of Michael Peterson. I had no interest in making a biopic. I wanted to make a movie about the transformation of becoming Charlie Bronson, which is this larger than life concept – brand – out of the UK that represents anti-authority.”

Actor Tom Hardy plays the role of Bronson, and it is a particularly brilliant performance.

“First we met, and we didn’t like each other,” Refn says about how Hardy came to portray this icon of anti-authority. “We met in a wine bar in London. I’m sure he found me very arrogant, and he went off to do some plays and other stuff and I went off to kind of look for other actors. I think in the end, deep down, the fault was mine because I didn’t really know what I wanted. I hadn’t really decided how to imagine the film. I hadn’t written it yet. I just had this idea. I met with a few Hollywood stars. Jason Statham and Guy Pearce were definitely in the picture. The casting director kept on saying that I should meet with Tom again, and in the end, there was nobody else. It was kind of inevitable.”

Bronson is shaping up to be a success for both the director and the star, but will Charlie Bronson reap any benefits from the film?

“Because it’s the UK, it’s not allowed. So he doesn’t get anything out of it,” Refn explains. “His family gets a little bit of a fee, but there are no back end or kickbacks. I think Charlie should be happy enough that a film has been made about him. I mean, the guy thinks it’s the greatest film ever made. He’s never seen it. He’ll never see it; he’ll never be allowed to watch it. I’ve been told he heard it on the telephone but, no, he’ll never … his mother came to see it at the premiere, and she very much liked it. That was very nice. That made me very calm, very happy.”

When asked what he thought of his subject, whether he is more than just “Britain’s most violent prisoner,” Refn explains, “He’s more like a conceptual artist, you know? He’s like somebody that uses violence as his act of art. And I do believe art is an act of violence, so certainly there was a lot of references to him in my own life and the way Charlie Bronson’s journey, his transformation, is very much about my own transformation.”

Bronson is certainly a transformation worth seeing.