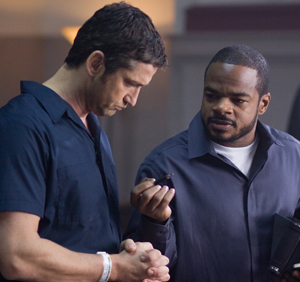 F. Gary Gray is the Manny Pacquiao of filmmaking. Small and spry, just when you think you’ve got him figured out, he cold cocks you with a total knockout.

The man who was able to make Mini Coopers badass in The Italian Job is back with Law Abiding Citizen, a thriller that is almost entirely contained yet stunningly visceral. With a nod to The Silence of the Lambs, Gray continues his oeuvre of creating brilliantly winning yet decidedly corrupt heroes.

In Law Abiding Citizen, Gerard Butler stars as Clyde Shelton, a man who witnesses the brutal murder of his wife and daughter. When the DA (Jamie Foxx) strikes a plea deal allowing one of the killers to walk free, Clyde unleashes a torrent of chaos and death to teach the system what justice and consequences really mean.

Though Butler’s character could easily be seen as a bloodthirsty sociopath, Gray turns him into a loveably menacing antihero who earns cheers from the audience while wreaking havoc; yet another character in Gray’s long history of turning the seeming bad guy into a people’s champion.

“My theory is if you go 20 minutes in a movie and don’t find yourself liking any of the characters, you’re in trouble,” Gray explains.

No matter who the main character is or how devious their behavior, the director understands his films hinge on the audience latching on anyway.

“Gerard brings a certain kind of humanity to a role that translates very well,” Gray continues. “It was a hard balance to strike, but I think he nailed it. We had a lot of conversations about how far he should go, and we were really careful about crafting that character because it’s too easy to go full on and lose the audience or make it so it’s not believable. Rehearsals were key for finding that perfect zone.”

For two weeks before cameras rolled on the film’s Philadelphia set, Gray, Butler and Foxx discussed, improvised and experimented with the characters. The director says he’s learned to throw the script out in the beginning of pre-production rehearsals in order to organically create nuanced, believable roles, better establish the story and generate a greater understanding of the objective of the characters.

“Once we’re clear on all that, it doesn’t matter how many times we rewrite the script; we know where the character has to go.”

Gray says he focused on trying to identify the objective of the scene and define what it meant in the story, however most of the time he simply sat back and let his leads go at it for hours on end, allowing them to discover gems along the way.

“A lot of the moments we improvised ended up creating things a writer simply couldn’t come up with on their own, not to take anything away from [Law Abiding Citizen’s scribe] Kurt Wimmer,” Gray says. “It was magic to see Jamie and Gerard volley back and forth and battle it out. Out of those improvisations, I would steal and cherry-pick key moments to put in the script.”

Talking about his leads makes Gray almost giddy. He has tremendous respect for both actors and consistently uses one word to describe their performances in the film: “phenomenal.” So what is it that makes a perfect leading man?

“I find they can strike a balance between being masculine and vulnerable,” Gray replies. “Bogart, Brando; they all had that quality, manly men who could get in there and have it out with the toughest guys around, but they were also vulnerable and could feel pain.”

Gray saw that same duality in both Foxx and Butler. Law Abiding Citizen required the actors to go mano y mano like two dogs circling each other, baring their teeth, but the film’s emotional core is what propels the story at all times. The film, despite its masculine bravado, is entirely about love, devotion and protection of family, unexpectedly tender for a movie that features numerous brutal, brilliantly devised, masochistic murders.

In Law Abiding Citizen, Gray was able to create a thrill ride without any Michael Bay-ish, CGI-laden tricks or nauseatingly jerky, blurred, anti-steady cam fight sequence in the Paul Greengrass school. In fact, most of the film’s thrills come from watching what Gray describes as the chess match between Foxx and Butler.

“I wanted to keep people guessing,” Gray continues, “keep people on the edge of their seats, and, although we have action, we really wanted to engage the viewer with the conflict and battle between these two men. It’s one thing when you have the spectacle of action. It’s a whole other thing when you see an extreme close up of Gerard and Jamie and they are intensely going at it without a fistfight, car chase or explosions, and it’s just as satisfying and gratifying as any type of action sequence that I can dream up.”