Nick Swardson: Go Ahead. Laugh. You Know You Want To. 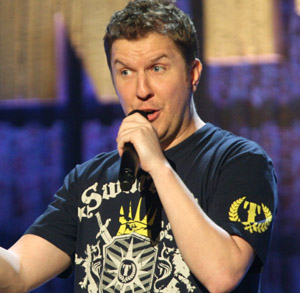 Swardson has risen to fame with his often over-the-top characterizations and balls-out humor. The Midwestern native grew up in all-American Minnesota where, like other young men, he loved sports, sports and more sports – especially football. However, Swardson slowly realized that he was gifted with an insane wit that he was compelled to unleash on anyone within range.

In actuality, it was fate that catapulted Swardson into his impressive career.

“I decided to do an open mic of stand-up comedy,” he explains. “I did it as sort of a goof.”

Swardson headed to a local club in Minnesota with a friend and planned to take to the stage with some buddies. However, when the friend never showed, Swardson did his thing anyway. The rest is history.

In recent years, the actor has had the opportunity to work with some of the finest, fearless and most cutting-edge comedians of his generation. His MySpace page is a who’s who of photos capturing him with the likes of David Cross (“Arrested Development”), Dane Cook (Dan in Real Life) and even Adam Sandler. Still he does admit that one of his films, in particular, holds a special place in his heart.

“My favorite work – I would have to say Grandma’s Boy would have to be my favorite because I had a big hand in writing it, and it was the first film I produced,” says Swardson.

Many might not know it just by looking at him, but this is one funny man who has a unique list of creative influences. While he admires the gumption of contemporary stars like Jim Carrey and the guys from “The State” (many of whom Swardson starred opposite on Comedy Central’s “Reno 911!”), his idols are a bit more old school.

“I was really a big Charlie Chaplin fan,” says Swardson. “I like a lot of his early projects. There’s one [film] called A Night in the Show, which is so fucking funny to me. He plays a performer and a drunk in the audience.”

Swardson also names director Woody Allen as another person whose work has caught his eye – fitting, since Allen was once a comedy writer, as well.

The future is sure to shine bright for Swardson; He’s got a barrage of exciting projects on the horizon. In Spring 2010, he will debut his sketch comedy show, “Pretend Time with Nick Swardson” on Comedy Central.

He and his staff of writers are currently working on the first six episodes. He admits that things are going well, but does express his concerns about the creative process.

“I’m trying to write sketches that don’t involve farting or cocaine,” he jokes.

Soon after, he will re-team with comedy legend Sandler for the feature, Born to Be a Star. This will be Swardson’s first starring role.

But for now, Swardson is enjoying life with his myriad friends and family members (He celebrated his birthday Oct. 9.) and is planning to craft his career like all his heroes before him. Forward momentum and unbridled ambition are what he hopes will soon make him a cherished household name.

“No great comedian has ever held back,” he says.

And Nick Swardson is a great comedian.