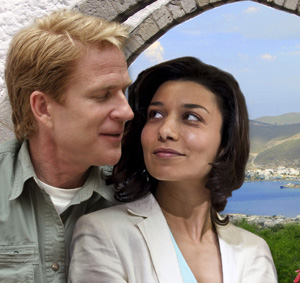 It’s a sound filmgoers might associate with Zorba the Greek or the sight of a raucous party tossing dishes onto the floor, a porcelain slaughter to demonstrate the joy of an occasion. Opa! is also the name of a film that’s been languishing on the shelf, making a seemingly endless yet noble run around the film festival circuit since 2005, but which finally reaches theaters.

Directed by Udayan Prasad (My Son the Fanatic), the film stars Matthew Modine as Eric, an American archaeologist obsessed with fulfilling his late father’s dream of finding a sacred chalice once used by Saint John the Divine just before he wrote the Book of Revelation, the final book of the New Testament. Using the kind of super high tech satellite surveillance and imaging technology usually reserved for spy game thrillers, Eric locates the resting place of the chalice which, unfortunately, is beneath a popular taverna owned by Katerina (Agni Scott), a vivacious young widow who loves to dance, skinny dip and holler “Opa!” as she careens down a windy mountain hill on her bike. Naturally, the two soon fall desperately in love with the glorious Greek isles as a backdrop.

It is extremely rare for an actor to have a continuous relationship with a film for more than a few months, but Modine has accompanied Opa! to numerous film festivals as it continued a fight to find distribution, a syndrome independent films are forced to suffer with more regularity these days.

When asked about the competition Opa! faces at the box office, Modine smiles and says, “There are either big action movies that they’re promoting with tie-ins at hamburger shacks all around the country, or big crazy comedies with lots of penis jokes. So if you have a film and your budget to advertise is $5 million and someone else is spending $100 million, how do you catch people’s attention in a world that is filled with so much noise, so many signs and billboards? How do you get people to be interested in a small budget independent film? That’s the conundrum.

“It used to be that you could go to a film festival and make a big noise, but now, because there are so many film festivals across the United States and the world, they’ve lost their strength. Sundance isn’t as important as it was even 10 years ago.”

While independent films struggle to find their footing in a world where media consumption and delivery are rapidly shifting, Modine is extremely proud to be an actor in the company of people “struggling to be a part of a profession that is about storytelling,” he says. “My dad used to say that when you walk into a room and it’s dark, it’s frightening because you don’t know what’s in the room, it could be filled with monsters. But it only takes turning the light on to realize that there’s nothing there to be afraid of. And that’s what filmmakers do. [Movies] give the opportunity of opening light into a space and making us realize that there’s nothing to be afraid of.”

Modine’s passion for filmmaking and acting are quite similar to the effervescent spirit at the center of Opa!, a word which infuses the film but is still somewhat mysterious.