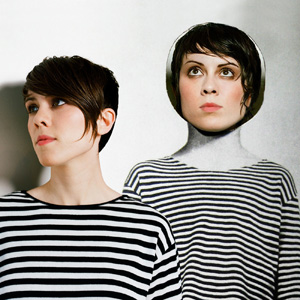 After calling their last effort The Con, Tegan and Sara have taken a look in the opposite direction for inspiration for their upcoming release, Sainthood.

“The songs were inspired by emotional longing and the quiet actions we hope may be noticed by the objects of our affection,” the duo says. “Sainthood is about obsession with romantic ideals. In the service of relationships we practice being perfect. We practice our sainthood in the hope that we will be rewarded with adoration.”

Sainthood drops Oct. 27, the same day that the twins release a three-book set called ON, IN, AT that chronicles their 2008 U.S. tour, their 2009 Australian tour and the making of Sainthood. To celebrate, Tegan and Sara will play two special shows at the Orpheum Theatre Oct. 25 and 26.

Singer/pianist Brooke Waggoner is about to release a new set of ethereal tunes entitled Go Easy Little Doves, and she says the material is strictly autobiographical.

“This is a collection of music I’ve wanted to record correctly for a very long time,” says Waggoner. “The project is full of Q&A, pensiveness, elasticity and romance – it truly follows my story from beginning to its current state. This is the one I’ve always dreamt of making.”

Go Easy Little Doves releases Nov. 3, and you can catch Waggoner at the Troubadour Oct. 20 and at the House of Blues Anaheim Oct. 22.

The members of Hawk Nelson don’t mind if you play their new album at levels that might disturb the neighbors. But according to Hawk Nelson founding member Daniel Biro, Live Life Loud is not all about the volume.

“It’s a philosophy,” says Biro. “It’s about embracing all of life, accepting and even celebrating a little pain and darkness and finding a way to let it enrich life.”

The band is hoping that its side project with TOMS Shoes will enrich lives too; they’ve designed a shoe for the TOMS “One for One” initiative whereby the Hands & Feet Orphanage in Haiti will receive a pair of shoes for a child in need for every pair of the Hawk Nelson-designed shoes sold. Live Life Loud is out now, and Hawk Nelson will appear at Club Nokia Oct. 23.

In light of what Joss Stone says about the making of her new album, Colour Me Free, it seems that she’s picked a perfect title for the set.

“I woke up one morning and wanted to make an album,” Stone says. “It’s very, very raw – basically a bunch of musicians, writers and myself just jamming. The album was not dictated or forced; it was an organic process where each musician was given the freedom to create their sound. It’s an honest and accurate representation of where I am as an artist and person right now.”

Jeff Beck, Sheila E., Nas, Raphael Saadiq and David Sanborn all guest on Colour Me Free, the 22-year-old’s fourth album. Target stores will have the exclusive retail rights to CDs, and iTunes will have a similar arrangement with the digital. Colour Me Free drops Oct. 20.

It’s hardly a revelation that rock bands like beer. But L.A.-based space-rockers Final Gravity really like beer. So much so that they named the band after a term used in the brewing of beer and gave several of their songs titles that could refer to guzzling the suds. They even adorned the CD cover of their new self-titled album with an array of symbols representing the ingredients of beer – water, barley, hops and yeast – cleverly arranged to mimic the cryptic symbols that Led Zeppelin used on the cover of Led Zeppelin IV.

Don’t expect the band to play sloppy drinking tunes though; these ale-lovers play razor-sharp classic rock that often sounds a bit like perfectionists Rush. Hear for yourself when Final Gravity drops in mid-November, or better yet, grab a beer with the boys when they play at Rusty’s Surf Ranch in Santa Monica Oct. 16.