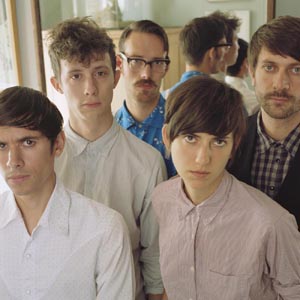 Formed in 2006 by Swedish musician Simon Balthazar, the quasi-symphonic indie pop band Fanfarlo create a unique first impression on the audience. The five multi-instrumentalist members incorporate an extensive use of instruments such as trumpets, violins, mandolins and cellos besides guitars and drums to produce rich and rustic harmonies.

“Our music has a connection with folk music. I grew up listening to folk,” Balthazar says.

The distinctive sound is then infused into passionate and dreamy stories sung by Balthazar.

“I’m inspired by songs that take us to places,” he says.

For example, “I’m A Pilot” tells a story about Howard Hughes.

“I write about the things that come to my mind, what I’m thinking about and things that I read from books,” Balthazar says.

The band’s fondness of literary references also extends to their name, which comes from a work by a 19th century French critic Charles Baudelaire, La Fanfarlo. Balthazar explains that the Romantic Movement during which the book was written had appealed to him rather than the book itself.

“Because our music has a romantic quality to it,” he says.

“There’s nothing around the place where we recorded,” Balthazar says, “and that helped us to focus on the music.”

The setting had been conducive, unlike their London base, which he says, “has a lot going on and many distractions.”

Despite being a young band, Fanfarlo have shown their potential by previously touring with Snow Patrol and performing at South by Southwest and the Hinterland Festival in Glasgow.

Reservoir will be available Oct. 13. For more information, visit fanfarlo.com.