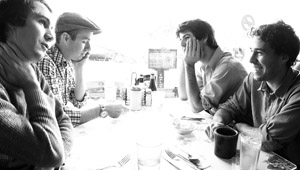 The last time I’d sat down with the Soft Pack’s consistent half, Matt Lamkin and Matty McLoughlin, the band was still calling itself the Muslims, based in San Diego and determining the easiest path to a Los Angeles relocation. Two years later, they’ve not only become L.A. transplants, but undergone a name change – a politically correct move they’re tired of explaining – and have solidified a lineup now featuring Brian Hill on drums and Dave Lantzman on bass.

Sitting with Lamkin and Hill on the night they’re to headline at the Bowery Ballroom, it’s relieving to learn that the guys in the band, despite having grown quite a bit in name since our first meet two years ago, haven’t changed a bit in terms of humility and warmth. I remind Lamkin of our Muslims interview from 2007, during which I’d asked about the ideal point of fame to reach, and of whether he and McLoughlin were worried about becoming too famous somewhere down the line.

He slowly smiles as he recalls his response – “I don’t think we’ll have to worry about that” – and he and Hill agree that it would be well enough to be able to use earnings from their music career to buy homes and leave it at that.

I should note here that, while fiddling through my interview questions, I see that I’ve positioned question No. 10 as “holy shit you opened for Phoenix at the fucking Greek.” See, when I’d first met Lamkin and McLoughlin, the Muslims had just started doing supporting sets at the Smell; tonight, they’re headlining a venue in New York with an approximate capacity of 550, as part of a full tour.

It’s helped, in terms of exposure, that they’ve supported bands like the Walkmen and Phoenix – yes, the latter at the Greek – and have received press in major outlets like the New York Times, Billboard and SPIN. But they’re humble, and note that, in truth, the Greek was nice and dark when they played, so they couldn’t really see how many people weren’t there to watch them. Alas, my gushing is wasted in this moment.

When the Muslims were receiving smaller doses of press, they garnered descriptions essentially generalizing them as surf rock. With more attention being paid, though, the Soft Pack are starting to be pinpointed under more interesting terms.

They like “party angst,” for one, apparently found as a parenthetical descriptor on a concert flyer. Lamkin also shows a little excitement at Buddyhead’s observation of the band’s “we will fix your computer” looks, though Hill’s quick to point out that they’re not so handy with computers, which perhaps makes them poseurs in dress. Short-sleeved dress shirts are a bit of a dilemma, I guess.

When they get on stage tonight, after a lineup of three solid supporting acts (including friends the Sundelles, for whom McLoughlin’s brother Trevor plays drums, and the Dig, whose scarily loyal fans give them the headlining treatment), they are more energized and perhaps more on than they’ve been in the past.

Hill really has done wonders for the band; as the Muslims, they were a good rock ’n’ roll band, but as the Soft Pack, with Hill’s clean, quick drumming, there’s a bit more fury in them, and really, they’re more punk rock than they’ve ever been. He drives opener “Right and Wrong” with a speed that hadn’t been touched during the band’s earlier performances as the Muslims, and yet is surprisingly soft-spoken when he takes his turn to speak on the band’s behalf.

Lamkin slightly flubs the first couple of lines to “Beside Myself” and shrugs it off with an eye roll, but no one in the (delightfully full) venue seems to notice. Instead, they’re actually dancing – something I’ve heard doesn’t happen often in New York – and moaning “oh-oh-oh” alongside him during “Bright Side.” And in the case of one vocal young lady who rushes up front when her wish is finally granted, screaming to hear “Nightlife.”

Two years prior, Lamkin had mentioned a potential desire to toy with electronic elements. They have incorporated a keyboard for the purposes of “Nightlife,” a limited dose for which they are probably best suited, but judging from the new songs played tonight, which sound fantastic yet consistent with the band’s established style, this foray into the future isn’t going to happen any time soon. Just as well.

The Soft Pack will perform Oct. 17 at the Echoplex. For more information, visit thesoftpackofficial.com.