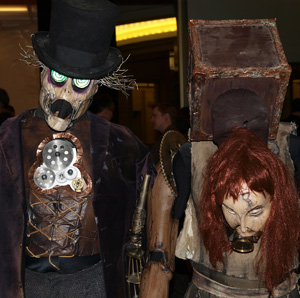 Are you gearing up for Halloween and need a good fright? Or do you just like the adrenaline rush a good scary movie provides? Check out the ninth Annual Screamfest in Hollywood this month.

Screamfest was formed in August 2001 by film producers Rachel Belofsky and Ross Martin in order to give horror/sci-fi filmmakers and writers a venue to have their work showcased to people in the industry in hopes of finding distributors.

Twenty-one feature length films are being presented over eight days. Among them are the opening film, The Tournament, staring Kelly Hu, Ian Somerhalder, Robert Carlyle and Ving Rhames. The Tournament is about deadly assassins killing each other for a cash prize on TV – think a violent reality show on speed.

The centerpiece film, The House of the Devil, offers a Satanic twist on the classic babysitting job gone wrong genre. Screamfest closes with The Fourth Kind, a fact-based thriller starring Milla Jovovich about the disappearances of people in a small Alaskan town over a 40-year period with possible extraterrestrial involvement and a government cover-up.

Foreign horror is represented in the films Bajo la sal (Mexico), Before the Fall (Spain) and Macabre (Indonesia). Screamfest also offers a short film series that gives both student and non-student filmmakers a chance to showcase their work. Over 20 short films will be screened, giving the future Wes Cravens and John Carpenters of the world a chance to have their work seen by horror fans and insiders alike.

The much buzzed about current release, Paranormal Activity, was first screened at Screamfest in 2007, so who knows what undiscovered horror gems might be found this year?