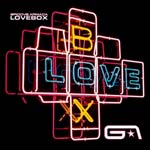 The UK duo of Andy Cato and Tom Findlay, collectively known as Groove Armada, has finally hit their stride on their fifth release, Lovebox. This amazingly erratic eleven-song collection comes out of left field at a time when many critics have written off electronica as a mindless fad, and proves itself an unexpected classic for the ages.

Instead of relying on the typical electronic music formulas, these DJs aren't afraid to break away from the BPM barrier and mash it up. Cheeky Fatboy-influenced ska cozies itself up to some serious rock pyrotechnics, while the gaps are filled in with huge hands-in-the-air anthems that are destined to be dance floor classics. Groove Armada's energy level on Lovebox is much higher than on any of their previous outings with a swinging groove that’s looser than an eight-year-old's baby tooth. But in the end, it's the band's recent fascination with ‘60s mod culture, including a special focus on the Beatles that gives them the edge over the contemporary DJ scene. The dance floor crowd is just too busy trying to out-future themselves while forgetting the lessons of the past. Meanwhile, Groove Armada finds themselves as both the gifted pupils and wizened sages of the 21st century.

Cloaked in a rich musical tapestry and thick bass lines nicked straight from Sgt. Pepper himself, these gifted songwriters have arrived at a whole new level reserved for more "serious" artists like Beck and Portishead. Not bad for a couple of party animals. Grade: A+