Gushing Over The Godfather Trilogy 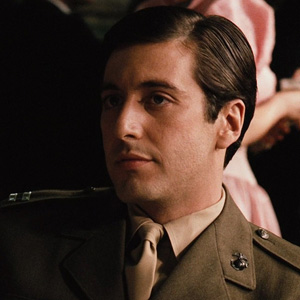 As I often do, sometimes I like to take a time-out from going on hypocritical, self-righteous, inarticulate, ignorant rants about movies and gush over a film or films I absolutely love. In this case I will be talking about The Godfather trilogy.

Normally when it comes to film, I’m an artsy guy with artsy principles. Everyone has their own tastes and sensibilities, and what works for some people doesn’t work for others.

Ultimately, I don’t think it’s really fair to bring the hammer down on any film because it may be someone else’s favorite, which means if looked at from another perspective, it’s great. But if for whatever remarkably stupid reason, you think that The Godfather films are bad (at least the first two), I reserve my right to splash whatever drink I’m holding in your face, and for your sake, let’s hope it’s not hot coffee.

Francis Ford Coppola’s Italian mob saga is a marvel of cinema. As if the first one wasn’t awesome enough, Coppola goes ahead and proves that you can make a great sequel to a great movie as long as you don’t crank it out in an attempt to take advantage of peoples’ enjoyment of the first one.

If I had to briefly describe what is so effective about the films it is that they work on every level, i.e. story, characters, performances, direction and production. Coppola takes a group of characters that are usually villains in most stories and makes them sympathetic by humanizing them. All the great films that become timeless classics are all similar in the fact that the characters absorb you.

In Part I, you see Michael Corleone (played to perfection by Al Pacino) get sucked into the family business after experiencing the near loss of his father at the hands of his enemies. Michael undergoes a powerful transformation from a war hero to a mafia Don, and at the heart of it is his desire to protect and support his family. Making a great film is hard, but making a sequel is even harder.

Sequels are often just structural remakes of the films that precede them, and Part II is such a well-told story, it becomes its own experience almost independent of Part I. Not only do we see the continuing adventures of Michael, we are taken back in time to the early 1900s and witness the genesis of his father, Vito (played to perfection by Robert De Niro).

It’s in Part II where the viewer can really come to understand the full ambition of the storytelling. Vito doesn’t become a mafia Don because he gets off on being a criminal. He does it because he sees everyone else in the neighborhood getting victimized by the local mob bosses who use fear and intimidation to make money.

He knows that the only way a person like him can rise above that is to become more powerful than his enemies. The film cuts back and forth between Vito and Michael, showing you how the sins of the father are visited upon his son.

Then we come to Part III, which came 16 years after Part II. A lot of people don’t like Part III, but I think it’s a brilliant film that effectively concludes the saga.

Coppola has said that he originally wanted Part III to be called “The Death of Michael Corleone,” and even though that didn’t end up being the official title, it about sums up what the film is about. Like Vito, Micheal’s life choices become the sins that are visited upon his children. Both men ultimately destroy that which they have spent their life trying so hard to protect: their family.

If you consider that Coppola was attracted to this story as an opportunity to create an allegory of American capitalism, you realize that these films are probably even more relevant today than when they were made. Now that I think about it, hot coffee is definitely the most appropriate drink to splash in the face of a Godfather hater.