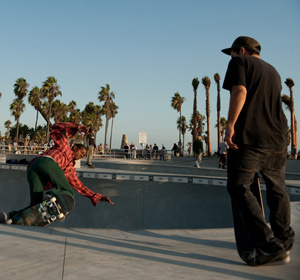 Sometimes, we really take for granted the convenience of driving. One century ago, horse and buggy was the common means of transportation. Now, vehicles without a television and navigational system are considered old school. The basic use and necessity of owning and driving a car has completely lost its appeal.

But not everywhere. I searched high and low for places where people savor the revving of engines and get behind the wheel, not because they have anywhere to go, but because they enjoy the ride. Despite busy schedules and the bustle of city life, I found that many Angelenos appreciate the ancient art of harnessing the wheel, too.

There is this place where you can race your friends: K1 Speed (k1speed.com). But don’t be fooled – these are not your childhood bumper cars. In fact, you have to be over 18-years old to drive unaccompanied and at least four-feet,11-inches tall. There’s even a mandatory session before you hop in the gear and jump behind the wheel. In 20 minutes you are transformed from Joe Schmoe to Dario Franchitti.

The exterior of the indoor driving track is completely inconspicuous compared to the high-tech, futuristic interior. It is everything you would expect an indoor racetrack to be. On this particular day, I went with a few of my friends, some who are naturally speed demons on the road and others who are nearsighted grandmothers.

Though I thought we must have been a funny sight, I suspect the staff has seen similar, if not more unusual, customers because the four of us uncontrollably giddy, semi-nervous college girls were greeted with kind, enthusiastic faces. We walked in, went ga-ga over the aesthetic appeal of the course and heard the spiel about not bumping each other’s cars. Yada, yada, yada. We’re mature 20-year-olds. We know this stuff.

After suiting up, we stepped anxiously into our respective cars. I can only speak for myself, but I felt like I was set free of rush hour traffic, horrendous L.A. drivers and annoying red lights. My vision tunneled to just the road ahead. Before I knew it, I was part of the car, and I was reminded of exactly why I love driving to begin with.

K1 Speed is open seven days a week for your convenience and has five locations in Southern California. It’s a perfect place for birthday parties or a simple outing with friends. They also offer an adult racing league if you’re serious about letting out pent-up energy on the racetrack.

We all have a need for speed every once in a while, and though I love driving (possibly as a result of growing up in Southern California where public transportation is virtually non-existent, and the city is a sprawling area, not a compact metropolis), there is another four-wheeled contraption that scares the crap out of me.

My friends have been trying to teach me to skateboard for years. They have yet to succeed. Whether you can ride the concrete wave or not, the new Venice Beach Skate Plaza near Windward Avenue and Ocean Front Walk is the perfect way to spend the afternoon by the beach.

Construction of the 16,000-square-foot park started last February. Eight months and $3.5 million later, the concrete park, full of ramps, rails, steps and everything else a Lord of Dogtown might need, is open to the public.

From 1999 to 2001, Venice Beach was under renovation during which time skateboarders rallied for the construction of a park in honor of Dogtown, the birthplace of modern skateboarding. Though the facility rivals skate parks around the world, it is one of the few to be located on a beach.

The skateboarder’s haven is a block from the beautiful California beachfront, and the local flavor of Venice is a distinguishable variable that contributes to the pleasant arena where talent and dedication are palpable in every trick.

Though I admit I am incapable of even standing on the board, I gained a new appreciation for the sport. The agility and fluidity of their bodies made me want to watch them all day.

I would have stood there all day and night had the sun not set. One day ends, but another one is always around the corner, providing ample opportunity for you to join in or witness it for yourself.